Showing posts from April, 2019
Show All

Part three of the KeepYourPowderDry guide to Civil War flags and colours looks at where we can see illustrated examples of Civil War flags, and also where we can get some for our armies. A plea to editors, authors and publishers of future volumes concerning flags of the Civil Wars: please push the boat out with your production values - books of flags need colour illustrations! First off we have to consider the three volume series English Civil War Flags and Colours from Partizan: Volume 1 covers the English Foot, Volume 2 Scots Colours, and Volume 3 the Bill Carmen collection. These volumes state the primary source material for the flag designs illustrated. Volume 1 was written by Peachey and Prince who intended to write a second volume (they make several references to it in the text of Volume 1) but it never made its way into print.  The latest reprint of Volume 1, earlier versions have a different cover Volume 1 has an absolute wealth of information inside including
6 comments
Read more

Part two of the KeepYourPowderDry guide to Civil War flags and colours looks at evidence - surviving flags, and contemporary records. Surviving Flags There is a watchett (blue green) piles wavy ensign in the collection at the  National Army Museum   (not on display), which very little is known about. One source claims it predates the Civil Wars (early 1630s), whereas NAM currently believe it dates from 1688 and belonged to Prince William of Orange (before he became King William III) Picture courtesy of the National Army Museum Of course, the ensign belonging to Sir John Gell's Regiment of Foot takes pride of place in the refurbished NAM.  I have read that when the museum was conserving Gell's flag, and the museum was undergoing major refurbishment, that it was planned to alternate display of the two flags in the NAM collection. ﻿ Antony House  in Plymouth, have a yellow ensign on display with black lion devices (possibly belonging to Alexander Ca
Post a Comment
Read more 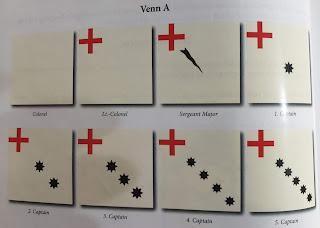 This is the first of three KeepYourPowderDry guides to Civil War flags. This part looks at the rationale and rules why Civil War flags looked like they did. Not often I get to channel my inner Dr Sheldon Cooper, I doubt it will ever happen again. To understand Civil War flags we need to know some nomenclature, some heraldic conventions, and the regimental flag systems used. Regiments of foot carried ensigns , which were about six feet square, sometimes  a little bigger at six feet six inches square. These were carried on short staffs and on occasion twirled enthusiastically. Ensigns were rallying points during the chaos of battle. We know that some were made of silk, and others taffeta. Looking at Sir John Gell's colour on display at the National Army Museum we can see that the designs were stitched on. There is some evidence that designs were sometimes painted on to flags. Regiments of horse carried cornets which were small (about two feet square) square flags attached to w
Post a Comment
Read more 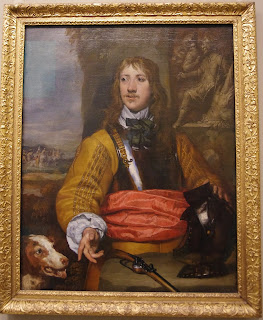 A bit of an afterthought it has to be said: Tate Britain leaves me, well a little underwhelmed to be brutally honest. However, what has piqued my interest is an exhibition of William Dobson's portraits. Dobson was held to be the finest English born portrait artist of his age, and became artist to the Charles's Royal Court in Oxford. He pretty much took over once Van Dyck was no longer on the scene. A small exhibition, which is on display until the end of this month, so you'll need to get a wiggle on if you want to see it. Dobson's most famous portrait of the Civil wars, Richard Neville Prince Rupert, Colonel William Legge and Colonel John Russell Quite like the detail in "Portrait of An Officer" Elsewhere in the gallery the 1540 gallery has a rather famous bust of Carolus Rex, which caused a little consternation to the pair of elderly visitors from the US who were very confused as to who it could be - they calmed down when I poli
2 comments
Read more
More posts