Showing posts from March, 2020
Show All

My original Sturt Some 'egging on' meant it was happening...

Some caveats: topography wasn't going to be in the recreation, nor were the correct regiments in the correct places (shoddy, I know) for example Waller's dragoons stood in for Okey's at Sulby Hedges (there is a little bit of real Sulby Hedges grit on their basing though - does that count?).


Played by Charles Gray in the 1970 version of Cromwell, the film r…
Post a comment
Read more

The Regiment then went on to fight at  Lincoln, the Siege of York, Marston Moor (all fourteen troops), Banbury Castle, Second Newbury. Half the regiment joined Waller's Southern Association participating in many m…
2 comments
Read more

The site of the fort, bottom left; the line of the walls stretching up from the fort  (Rocque's 1746 map)

Sadly, whilst this is clearly the historical location of part of Parliament's defences, these earthworks are most likely to be 'spoil' from the road improvements that took place in the 1960s as pictures from the 1930s clearly show an ab…
4 comments
Read more


Richard was wounded at Naseby and retreated to Lichfield where he died of his wounds. He was buried at Lichfield  Cathedral, where his memorial is still visible in the south aisle of the choir (the memorial is in Latin, but bears his coat of arms - look for a goat's head).

If you enjoyed reading this, or any of the other posts, please consider supporting the blog.  Thanks. 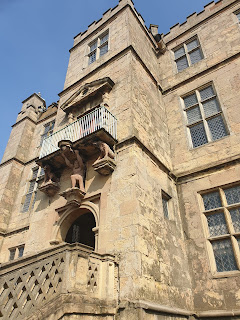 Bolsover Castle: mmmm, I hear you say. Besieged? Nope. Battle of? Nope. Home of William Cavendish the Marquis of Newcastle, and commander of the King's northern army? You'd be correct.

Okay, so there wasn't a big dust up here in the seventeenth century, but if you get a chance to visit, it's well worth it.

Like several grand houses in Derbyshire, Bolsover had a Royalist garrison, which was a bit of a thorn in the Parliamentarian side. Troops from the garrison venturing out to disrupt Parliamentarian activities, and gather supplies. On one occasion an "agent" was sent to Derby to sow discord and incite rioting.


Home to the Cavendish family, William entertained King Charles and his Queen, Henrietta.  William was an accomplished horseman, and was to become Charles II's riding instructor.

A castle existed on this site from the eleventh century; Charles Cavendish, and then his son William, undertaking a major rebuild in the early seventeenth century.