- 16 March
After so many Regiments of Horse I'm taking time off from cavalry and rewarding myself with a Regiment of Foot.

They developed a reputation for being proficient skirmishers and plunderers - obviously venturing out of Lichfield to resupply the garrison. 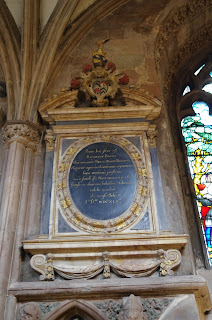 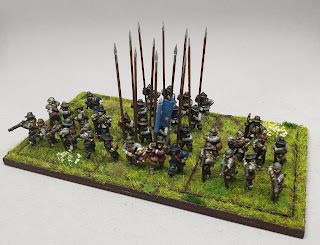 Their coat colour is unknown but their colours are - often incorrectly shown as being purple, the diarist Richard Symonds specifically describes the colour as azure (blue) field with mullet or (gold stars).

A number of wargame focused websites state that Bagot's wore purple coats, and one of the photos on the Bagot's RoF reenactment website looks to show bluey purple coats, but there is no evidence to suggest this was the case. The regiment are re-enacted by Colonel Richard Bagot's Regiment of Foote, who have chosen to wear a variety of red, and blue coats.

I chose to go with a grey coat, taking the lead from Gell's, and Rugeley's Regiments who were from the same part of the world. 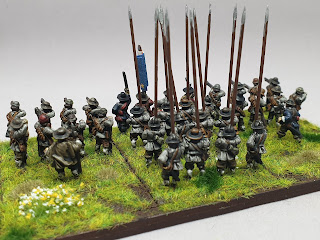