Showing posts from July, 2020
Show All

Raised in 1642 for the Irish campaign under the command of Lord Kerry,  they were actually led by their Lieutenant Colonel, William St Leger.


They returned to England in November 1643, joining Vavasour's forces at Gloucester. Possibly participating in a skirmish at Wooton under Edge. After this brief stint in and around Gloucester they joined the King's Oxford Army in 1644, where command was nominally given to the future King James II. Initially quartered at Marlborough, their numbers were swelled with two companies of troops from Lord Inchiquin's RoF. They possibly helped the defence of Monmouth.

Peachey and Prince deduced that they wore white coats, although this is by no means certain. They carried red and black gyronny flags. To be very honest, the flag sold them to me. Recently I have started choosing regiments on how 'inter…
3 comments
Read more 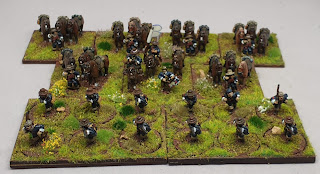 Raised in 1642 by Colonel James Ussher, Washington was Lieutenant Colonel and led the Regiment at Edgehill. He took over command when Ussher was killed, scaling the walls at Lichfield in 1643. They are also known as Prince Maurice's Dragoons as it appears that Maurice was honorary colonel.


They fought at Powick Bridge; Edgehill; were present at the Standoff at Turnham Green; stormed Marlborough; possibly a skirmish at Burford (where they over wintered as a garrison regiment); the standoff at Cirencester; stormed Cirencester and Birmingham, before taking part in the siege of Lichfield, where Ussher fell.

As Washington's Dragoons they fought at Caversham Bridge; Chinnor; Chalgrove Field;  the storm of Bristol; the siege of Gloucester before garrisoning Banbury and Evesham. From there they marched north with Rupert probably firing the only shots fired at the storm of Stockport; and most probably  Marston Moor - whilst there is no specific mention of Washington’s at Marston Moor, th…
3 comments
Read more

The Sieges of Lichfield

At the outbreak of war the Royalists took control of Lichfield, or rather they occupied The Close - the medieval fortified Cathedral precinct surrounded by a moat and defensive walls. Lichfield's population generally sided with the Parliamentarian cause, but the Cathedral staff with the King.

The First Siege
In March 1643 Lord Brooke led the Parliamentarian assault upon The Close, famously being shot at long range by John Dyott (a deaf mute game keeper, in position on the Cathedral's central spire). This is most probably the first recorded death due to sniper fire. Sir John Gell took over command and The Close fell to Parliament after two days.

The Second Siege
In April 1643 Prince Rupert led a considerable Royalist force from Oxford to retake the town and Cathedral. Rupert's engineers drained the moat, undermined the walls of The Close and detonated a mine - possibly the first example of a mine being used in England to breach a wall. The Parliamentarian defenders surrendere…
3 comments
Read more 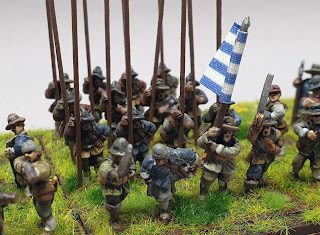 Kent was a deeply divided county in the Civil War; although nominally under Parliamentary control, there were Royalist risings in Tonbridge and Sevenoaks in 1643, Canterbury in 1647 and a major uprising in 1648, culminating in the Battle of Maidstone.

The Trained Bands however remained firmly in Parliamentary control, even in 1648, and formed part of the Southern Association under Sir William Waller.
The Bands were organised by "lathes" or areas, a system unique to Kent believed to date to the Kingdom of the Kentish (which existed until the 9th Century).
There were five Lathes: Sutton at Hone – adjoining London, including Blackheath, Bromley, Dartford and Westerham
Aylesford – from Chatham and Rochester in the north  to Tonbridge in the south, with the county town, Maidstone.
Scraye – a more rural area, though including Ashford and Faversham.
St Augustines – Canterbury, and the north Kent ports of Dover, Deal and Sandwich
Shepway – the south Kent ports of Folkestone, Hythe and Romn…
6 comments
Read more 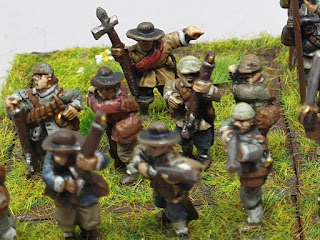 Why has this regiment got a 'Parliamentarian' tag and a 'Royalist' tag I hear you wonder?

Originally raised by the good citizens of Brizzle, in 1638 they consisted of 300 men armed with 210 muskets and 90 corslets; many of these men would venture north to fight in the Bishops Wars the following year.

As the country edged closer and closer to Civil War, Bristol was trying to remain resolutely neutral. When Essex marched on the city the city governance accepted the inevitable and allowed Essex's men to enter Bristol. So the Bristol Trained Bands became 'parliamentarian'. At the outbreak of war the Trained Band was commanded by Colonel Andres Charleton.

When Bristol fell to the Royalists the Regiment changed allegiance. The Trained Band would pretty much remain Bristol's garrison regiment regardless of which faction was in control.

By 1645 there were two regiments of the, now Royalist, Trained Band in the city: they were commanded by Colonel Thomas Colston (a …
2 comments
Read more


Plaque commemorating the raising of the Royal Standard,  corner of Standard Hill/King Charles Street
Nottingham Castle was the site of a number of smaller actions during the First Civil War, eventually falling into Parliamentarian hands. One time prison to Sir Marmaduke Langdal…
Post a comment
Read more


Depicted wearing civilian clothes, and a hefty smattering of trained band buff, you'll be pleased to hear that they are carrying the correct flag for 1643-1647. Their flag is rather odd in so far that it doesn't…
Post a comment
Read more


But back to Colonel John Birch and his Regiment of Foot, raised in Kent in 1644 for service in Sir William Waller's Southern Association. We know that they had red coats and yellow flags, but not what design of flag. Playing it safe I've gone for the Lieutenant Colonel's flag (I've used the Gell's Lieutenan…
Post a comment
Read more

Sir Gervase lost much of his wealth over the course of the wars, so much that he was willing to accept the post of Governor of Bombay at the Restoration, dying in the city in 1688.
* in case you are wondering, it is pronounced 'beaver'
Post a comment
Read more
More posts