- 09 July
Welcome to my Tower Hamlet's Trained Band. A unit that has had more incarnations than a Tina Turner tribute act has outfit changes.

Depicted wearing civilian clothes, and a hefty smattering of trained band buff, you'll be pleased to hear that they are carrying the correct flag for 1643-1647. Their flag is rather odd in so far that it doesn't appear to follow any conventions. The flag carries a central Iehova plate, with 'feathers' in the corners. Company distinction being represented by plates along the topmost edge. 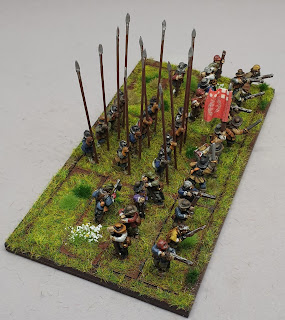 Raised as part of the 1643 suburban expansion of the London Trained Bands, they don't really have a very extensive list of battle honours skirmishing at Newbridge then fighting at Cropredy Bridge. 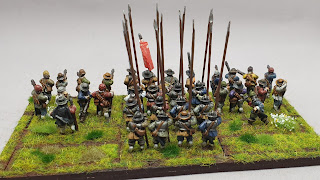 If you would like to know more about the Trained Bands, why they have a reputation for not wanting to get too heavily involved in long campaigns, and why the London regiments almost certainly wore civilian clothes  have a look here.
If you enjoyed reading this, or any of the other posts, please consider supporting the blog.
Thanks.
figures Parliamentarian Peter Pig Regiment of Foot Trained Bands