Showing posts from June, 2020
Show All


Robert inherited his father's title at the tender age of 6, and became the ward of King James I, James sold this wardship to the Philip Herbert 1st Earl of Montgomery and 4th Earl of Pembroke for £4000. He would marry Herbert's daughter when he was just 15.
Robert was originally buried…
2 comments
Read more

Percy was dismissed from service as it was alleged that he was complicit with Lord Henry Wilmot's secret attempts to negotiate a peace treaty with the Earl of Essex.
If you like reading the content please consider supporting the work of the bl…
Post a comment
Read more

Believed to have been at the siege of Hull, they fought at Edgehill, Brentford and were present at the Turnham Green standoff. They stormed Marlborough before taking up a garrison posting in Oxford. Venturing out of Oxford with Prince Rupert to storm Cirencester, and fight at the Battle of Caversham Bridge.
Sir William died in the Oxford 'epidemic' of August 1643 (Pennyman Papers held at Hull University  Archives). It is believed that there was a large outbreak of typhus in the Thame valley, and this was what the phrase 'the epidemic' referred to; although outbreaks of plague were also common place, so plague too is a po…
9 comments
Read more

The Battles of Middlewich

The ECW Travelogue returns with it's first socially distanced entry.

Aston arrived in Middlewich with 500 horse, about 1000 Trained Band soldiers, and 3 pieces of artillery on Saturday 11th March. The next day Brereton sent a small detachment of dragoons to harass Aston's men. Meanwhile Lord Brereton was marching from Chester with another Royalist force. Sir William Brereton called for Parliamentarian reinforcements from Nantwich.


By the Monday morning the Nantwich reinforcements had failed to materialise, so Sir William attacked with 200 musketeers and all of his cavalry. Aston sent dragoons to distract Sir William's men, and was told not to engage with the enemy. Unfortunately they didn't obey orders and the Parliamentarians took control of one of the main roads into Middlewich. Aston reinforced the Parliament…
Post a comment
Read more 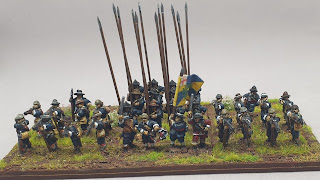 Another wargamer's favourite, on account of having an interesting flag. Their flag is often shown as blue and yellow, although the 'yellow' might more properly be a browny gold (Symonds described as 'fillemot' rather than 'or'). The flag also has a central laurel wreath design - the significance of this is unknown.
Raised in Lancashire at the outbreak of war, initially part of the Earl of Derby’s army, they marched south and served with the Oxford Army. Fought at the siege of Manchester, Edgehill (where Gerard was badly wounded), present at the Turnham Green standoff before garrisoning Oxford. Took part in Rupert's storming of Cirencester, and possibly Birmingham too.

Gerard was wounded (again) at the siege of Lichfield. The Regiment besieged Reading, fought at First Newbury, and they were led at Cheriton by Lt Col Windebank; Gerard retaking command for a number of sieges and stormings (Kidwelly Casstle, Carmarthen, Cardigan, Newcastle Emlyn, Laugharne Ca…
6 comments
Read more

My highlights are the fight scenes: keep a close eye on the daggers and swords being used by the extras, judging by how some of them wobble they must be made from a very flexible rubber.
If you like reading the content please consider supporting…
2 comments
Read more 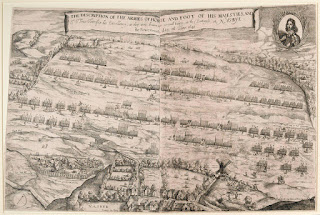 As the anniversary of the Battle of Naseby approaches, I have added some extra information, and updated some other bits. In light of the Covid-19 outbreak and the absence of any formal commemorations, a gentle stroll around the battlefield is an appropriate way to remember the events of 375 years ago.

Back in the day when this blog was knee high to a grasshopper I wrote an entry about visiting Naseby, with a picture of the obelisk and a few postcodes for some of the landmarks on the battlefield. I also vowed to return. I have.

So here is a more definitive (and up to date) visitor's guide to Naseby battlefield. In my previous blog entry I suggested using a Battlefield Trail Guide from The Naseby Battlefield Project website; I found this to be pretty vague and struggled to follow it at time; so, here is my guide to the locations. There are audio clips available (NBP) which relate to the different locations (since my last visit there is now good 4G coverage over almost all the battle…
6 comments
Read more
More posts