- 01 June
The regiment was probably formed from troops released by the Cessation in Ireland, and commanded by Colonel John, then his brother Sir Gilbert. 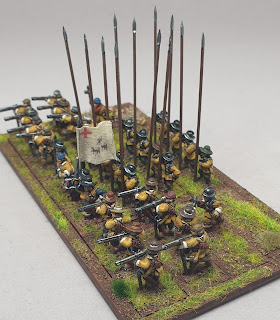 Symonds records the Regiment as wearing yellow coats and carrying six white flags with ‘Talbot Hound’ devices.  Sadly Symonds didn't record the 'hounds' clearly, so it is possible that they might be another heraldic animal, but a 'Talbot hound' is the most probable. 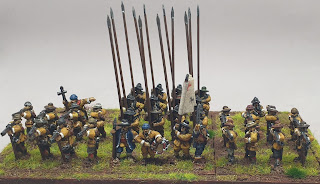 John was commissioned to raise the Regiment in 1643. The majority of the Regiment fought as part of Hopton's army at Cheriton, Cropredy Bridge, Lostwithiel, and Second Newbury.

The Regiment went on to garrison Tiverton Castle, which too fell in 1645 (October).


Both brothers are buried at St Michael's Church, Salwarpe, Worcester.
If you enjoyed reading this, or any of the other posts, please consider supporting the blog.
Thanks.
figures Regiment of Foot Royalist

The final Parliamentarian harquebusiers for some time leave the painting table. Lord Ferdinando Fairfax's Lifeguard of Horse: raised in 1643 they were present at the capture of Leeds, and the Battle of Adwalton Moor. 1644 saw them besiege York, fight at Marston Moor, skirmish at Halton before skirmishing a Leeds. 1645 saw the regiment venture a little further afield after a skirmish at Skipton: they were sent to Cheshire to join Brereton's army - they didn't really do much apart from besieging High Ercall and joining the march into Wales (for which the regiment got paid £200). After service with Brereton they returned to Yorkshire after spending a couple of months in Derbyshire. Their final engagement was the Battle of Sherburn in Elmet. The Regiment carried an a cornet with interesting imagery -a Papal crown impaled upon a sword topped off by a royal crown. It carries a motto in Spanish which translates as "no hurt to the King, but to his evil Government" which s
Read more

If you are new to the blog, or new to painting ECW figures - welcome. Now go and read what colours to use  first, as this entry will make much more sense if you read this second. Caveat: I paint true 15mm figures and apply a heavy wash of Citadel Nuln Oil. These colours work in this setting, with the heavy black wash subduing the colour a bit. If you are starting painting out different sized figures you might need to go brighter or slightly darker depending upon size of your figures. A number of people have asked me what colour paints I use for certain regiments or a particular item. So here is my attempt at converting the colour chart found in part one  into a brand and colour of paint. I must confess that I am a fan of  Foundry and  Coat d'Arms  (Cd'A) paints, so mostly I have identified their paint colours. If you are a fan of other brands there are a number of paint comparison charts available on the web, one of the best is Dakka Dakka . Other colours I use (th
Read more