- 29 June
Prince Rupert's Regiment of Horse - the epitome of dashing cavaliers. Rupert was of course, King Charles's nephew, started his military career at age 14 when he accompanied the Prince of Orange on campaign.  He arrived in England in August 1642 with his brother, Maurice, and a retinue of battle hardened English and Scottish veterans of the wars in Europe.

Often seen as hot bloodied, and in command when the Royalist army committed some of the worst atrocities of a brutal barbaric war, he was also capable of leniency against foes who had put up a brave fight. 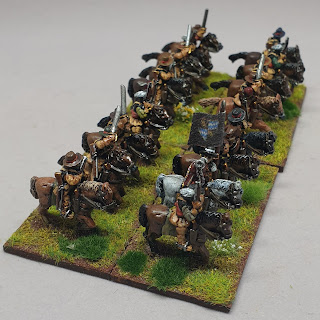 Of course no mention of Rupert can fail to mention his poodle Boye; Boye wasn't a 1970's toy poodle (as depicted in the film Cromwell) but instead a hunting dog.

His Regiment of Horse, as one can imagine, followed him everywhere and have a lengthy battle roll. 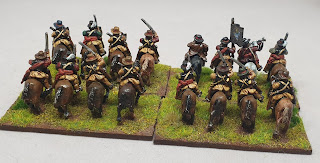 They attacked Caldecote Hall but retire after Mrs Purefoy's steadfast defence (which sounds like something from a Carry On film), Powick Bridge, King’s Norton, Wormleighton, Edgehill, Aylesbury, the standoff at Windsor, Kingston upon Thames, Brentford, the standoff at Turnham Green, stormed Marlborough, Cirencester, Malmesbury, Birmingham, Lichfield, Islip, Chinnor, Chalgrove Field, Padbury, Bristol, Siege of Gloucester, Aldbourne Chase, First Newbury, Bedford, Towcester, the standoff at Aylesbury, Market Drayton, Newark, Stockport, Bolton, Liverpool, Clitheroe, Marston Moor, Welshpool, the Relief of Donnington, Ledbury, Beeston Castle, Leicester, Naseby, Bristol, besieged in Oxford before disbanding at the surrender of Oxford.
Brushwork on these by Alan Tuckey, basing by my own fair hand.
If you enjoyed reading this, or any of the other posts, please consider supporting the blog.
Thanks.