Showing posts from August, 2021
Show All

In the interests of varsity equal opportunities, after visiting Cambridge, it was only a matter of time before the ECW travelogue made a flask up and ventured south to... Oxford: ancient University city, home of dreaming spires, Inspector Morse, and where King Charles presided over his court after failing to secure London. Bradshaw's Hat, on display at the Ashmolean. Lord President, Bradshaw reputedly wore the reinforced hat during the trial of Charles I in case of an assassination attempt* Charles set up court at Christ Church in October 1642, and would ultimately set up a rival Parliament in the city in 1644. Besieged many times by Parliament, the city was significantly fortified, and the garrison far outnumbered the resident population.  What's There Today? Probably the best place to start is the  Ashmolean Museum : one of the world's great treasure houses there are a number of artefacts on display relating to the Civil War. The Ashmolean also has a self guided Civil
Post a Comment
Read more 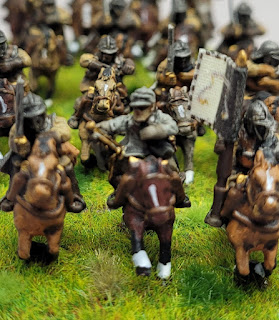 Sir John Gell was a bit of a favourite here at Château KeepYourPowderDry due to the Derbyshire connection, and having oodles of his belongings survive in museums. However, a little bit of research into the man himself reveals that even by seventeenth century standards he could be described as somewhat misogynistic.  We've already met his Regiment of Foot (another wargamer favourite - possibly the only military unit that we can, hand on heart say we know what their coats and flags looked like); Gell also had a Regiment of Horse. Well, when I say a Regiment it only existed as a 'Regiment' on paper. In reality it was independent troops who came together for the rumble at Hopton Heath, and were nominally under Gell's command.  Obviously as Gell was a little busy commanding the army, actual command of the 'Regiment' fell to Major Thomas Saunders. Gell and Saunders didn't really get on too well. Some of their mildly acrimonious letters still exist. Whilst there is
1 comment
Read more 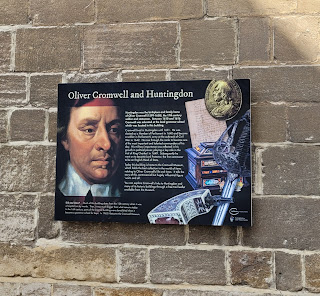 The ECWtravelogue visited the Cromwell Museum (see  here ) what seems an age ago. In the intervening time the Museum closed for a major revamp and I've been waiting to re-visit for over a year (thanks to a global pandemic). Strangely the museum has been somewhat constrained by the building, they haven't been able to implement a TARDIS upgrade. What they have done is made everything much brighter, smarter, and well... much more nicely presented than it was. My first impression was that the extensive collection of portraits was easier to view. Might be a clue here as to whom this museum is 'dedicated to' (and it isn't Monck who has photobombed the shot) Riding gaiters When travelling I carry a first aid kit in my car, the Lord Protector was no different: his travelling apothecary set Cromwell's stirrups. Probably. Postcodes for SatNavs The Cromwell Museum PE29 3LF If you enjoyed reading this, or any of the other posts, please consider  supporting  the blog.  Thank
Post a Comment
Read more

Once again the ECW Travelogue packed a toothbrush and set off for the wilds of Essex, this time to visit the Combined Military Services Museum (henceforth CMSM).  CMSM grew out of a private collection to be the museum that is seen today. The museum houses a number of collections of national importance including the Donnington Collection, as well as an extensive SOE collection, and a very impressive collection of WWII uniforms.  However, what interests the ECW Travelogue is the arms and armour, 1800BC- 1800AD collection. Apparently the curator's interests lie with the Civil Wars too... The evolution of the helmet The museum really is worth travelling out of your way to; the displays are inevitably a little crowded (as they have so much stuff in a relatively small space), they would need a much larger site to display the collection better. So here's a photo gallery of some of the items on display (lighting in the museum makes photography pretty difficult), notable items have a c
2 comments
Read more
More posts