- 30 July
Raised in 1642 for the Irish campaign under the command of Lord Kerry,  they were actually led by their Lieutenant Colonel, William St Leger.

They returned to England in November 1643, joining Vavasour's forces at Gloucester. Possibly participating in a skirmish at Wooton under Edge. After this brief stint in and around Gloucester they joined the King's Oxford Army in 1644, where command was nominally given to the future King James II. Initially quartered at Marlborough, their numbers were swelled with two companies of troops from Lord Inchiquin's RoF. They possibly helped the defence of Monmouth. 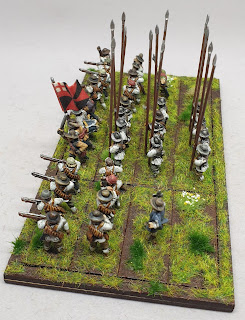 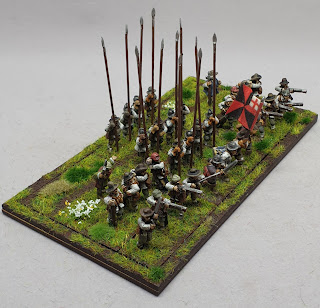 Peachey and Prince deduced that they wore white coats, although this is by no means certain. They carried red and black gyronny flags. To be very honest, the flag sold them to me. Recently I have started choosing regiments on how 'interesting' their flag is, I have far too many plain flags, so gyronny flags are a winner every time! 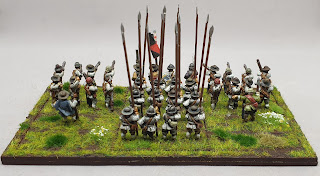 Quite a few headswaps here, and the new style pikes from Donnington, which have a much more pronounced leaf shaped spear point. I've tried to file them down to 'match' the older style pikes.
If you enjoyed reading this, or any of the other posts, please consider supporting the blog.
Thanks.