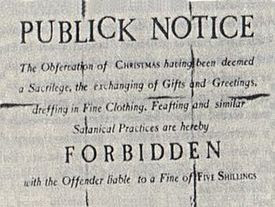 Whilst happy to celebrate my Parliamentarian heritage and leaning (my great × lots uncle became General Treasurer of Lancashire for Parliament in 1643), if Parliament* was against cake I may well have to become a turncoat and rally to the King's aide.
* it being that time of year, it is only right and proper to debunk the commonly held fact that Cromwell banned Christmas. The Puritans who held the majority effectively banned Christmas as a) they believed it to be wasteful and a sin, and b) as an attempt to persuade the Scots Presbyterians that only by supporting Parliament could they achieve their goal of religious tolerance. Parliament banned Christmas, not Cromwell.
If you enjoyed reading this, or any of the other posts, please consider supporting the blog.
Thanks.
ephemera