- 31 December
Postie has just dropped this book on my doorstep. Bought from Caliver Books, this German language tome has enough English titles and captions that even I can understand it.

Combining all published ECW flag reference books in one handy volume. Flags illustrated are referenced to their original source. They are represented in full colour: split into Parliamentarian, Royalist, Irish and Covenator sections, and are then ordered in trained band/militia, infantry and horse sections.

Flags are listed in alphabetical order, with a number of flags listed as 'unknown'. Where only remnants remain (ed) such as Prince Rupert's, then alternative interpretations are also shown. Also, where sources disagree on the layout of markers for 4th captain, say, both options are illustrated.

So far, I've only had a cursory look, nor have I tried to translate the introduction, but this looks very very good. 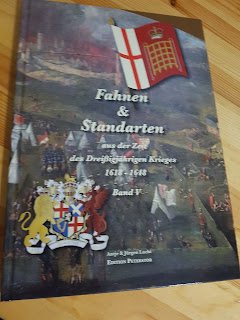 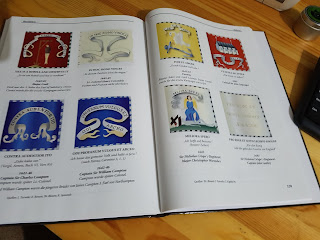 In a severe bout of 'what to paint next' I added some command figures to my Parliamentarian and Royalist armies. As Peter Pig make a limited number of 'generals' I had to deploy my trusty headswapping skillz to try and make them look a little different.
I have become a little hung up on detail recently and now strive to have the correct coloured hair/horses/etc for the real life commanders that my figures represent. We are blessed that there are a number of portraits to use for reference; unfortunately some portraits are proving rather difficult to track down (if they exist at all), which is where the use of lobster pot helmets comes in very handy.
First up three men of Parliament.

Lieutenant General James Wemyss: who was an interesting fellow. A master gunner, he was captured at Cropredy Bridge.


Robert Devereux, 3rd Earl of Essex: commander of Parliament's forces until he stepped down in 1645 due to the publication of the Self Denying Ordinance. The lobster pot he …
Read more


Played by Charles Gray in the 1970 version of Cromwell, the film r…
Read more