- 27 December
Putting aside the use of seventeenth century misogynistic language in the title this is a fictional account of one thinking woman's (how very dare she have her own thoughts and opinions - hence she earns the epithet 'whore') journey through the Civil War period.

An acclaimed writer, favourable reviews from the broadsheets, and with a pretty stellar cast (Peter Capaldi is brilliant as Charles I) this promised so much. Looks really good, has a good 'feel' to it; and of course it provides good inspiration for choosing general clothing colours, and being on in the background whilst painting. Won a Bafta for best costume design.
Historical accuracy: they manage to throw in quite a bit of accurate history - the Diggers, the Levellers, Lilburne, Burford mutiny, Bradshaw's armoured hat.
Episode three covers Cromwell's Irish campaign: at thirty minutes an Irish officer rides out of Wexford with his helmet on back to front, cut to next scene and it is on correctly.

But... can't quite nail down why I wasn't gripped by it. Angelina Fanshawe, the protagonist of the series, is a modern woman parachuted into seventeenth century England, which not only doesn't fit the narrative, but grates somewhat. The sex scenes are gratuitous, and are completely unnecessary, but fit with the 'strong modern woman' characterisation. As the rest of the drama is so firmly set in the seventeenth century surely Angelica should be a strong seventeenth century woman? The whole thing just doesn't quite mesh.
In a coincidence of casting Timothy Bentinck (who just so happens to be the 12th Earl of Portland in real life, and David Archer in The Archers) who played dashing cavalier Tom Lacey in By The Sword Divided plays one of the judges who try Angelica.
There was a follow up series set in 1680 - "New Worlds". Both series are available to stream on All4. 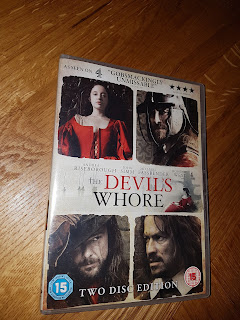