- 23 December
The National Army Museum (Chelsea) reopened last summer after being closed for two years. I never visited prior to the revamp, so can't 'compare and contrast'.

Well presented, spacious, excellent café - although thanks to its location don't be at all surprised to inadvertently eavesdrop on conversations that come straight from the 'overheard in Waitrose' Twitter feed.

One of the first galleries covers the Civil Wars, the highlight being Sir John Gell's Regiment of Foot standard. Sir John Gell's was the Derbyshire regiment so a bit of local pride seeing it. 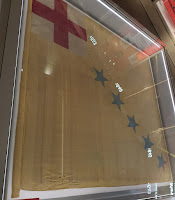 There are a few other items of interest, and portraits of Cromwell and Monck. An original Sturt engraving of the Streeter's Naseby plan is also on display. 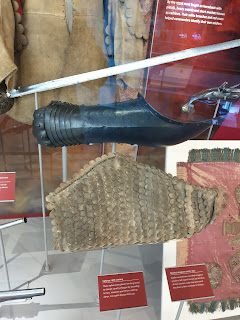 Cavalry often wore an armoured left gauntlet (bridle hand) for protection. What is particularly interesting is the fish scale buff leather upper left arm protector - I don't know of any other example on display elsewhere

The other highlight for me is the Siborne model of Waterloo, although I think it isn't displayed as well as the other Siborne model in Leeds.

(Lighting is great for viewing, but awful for taking pictures in here.)

Worth a visit if you are in the area. Free entry too.


They also have the following standard from the era, sadly not on display. 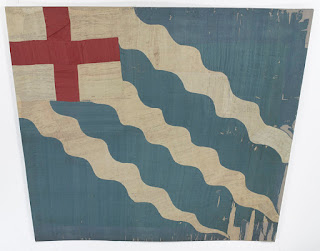 An interactive touch screen display, close to Gell's colour, illustrates this standard. It is identified as being circa 1688 and belonging to Prince William (later William III). Alternative sources suggest it predates the Civil Wars
Lots more for the London Civil War tourist can be found here.

In a severe bout of 'what to paint next' I added some command figures to my Parliamentarian and Royalist armies. As Peter Pig make a limited number of 'generals' I had to deploy my trusty headswapping skillz to try and make them look a little different.
I have become a little hung up on detail recently and now strive to have the correct coloured hair/horses/etc for the real life commanders that my figures represent. We are blessed that there are a number of portraits to use for reference; unfortunately some portraits are proving rather difficult to track down (if they exist at all), which is where the use of lobster pot helmets comes in very handy.
First up three men of Parliament.

Lieutenant General James Wemyss: who was an interesting fellow. A master gunner, he was captured at Cropredy Bridge.


Robert Devereux, 3rd Earl of Essex: commander of Parliament's forces until he stepped down in 1645 due to the publication of the Self Denying Ordinance. The lobster pot he …
Read more


Played by Charles Gray in the 1970 version of Cromwell, the film r…
Read more