- 26 December
I am a great fan of Hovels's buildings, having both the La Haye Sainte and Hougoumont buildings. So it was inevitable that they would be my first port of call for some ECW buildings (more on that in a later post). Their range is quite limited, so when the manufacturer of my figures released some ECW buildings I snapped them up. They match size wise the Hovels buildings really nicely.

They come in two halves - the ground floor and upper floor/roof are separate. Chimneys are cast in white metal and require gluing in place. The two halves marry together well, although a little bit of green stuff was required to make any gaps/cracks between the two halves disappear. 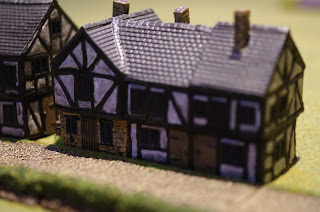 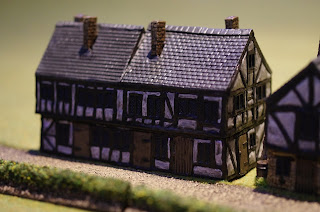 Paint followed my usual pattern - an undercoat of Liquitex spray burnt umber. I then badly painted the white panels in (so some of the undercoat was visible); timber frame was painted with Rail Match weathered black, which is one of my go-to colours at the moment. Windows were Foundry Prussian blue. Roof Coat d'Arms slate grey, chimney stacks Rail Match weathered stone. Wooden doors Humbrol wood. Then judiciously washed with Citadel agrax earth shade and nuln oil. A bit of flock on the landscape bits, followed by some Army Painter matt varnish spray.
If you enjoyed reading this, or any of the other posts, please consider supporting the blog.
Thanks.
buildings scenery