- 22 December
Whilst attending the Derby World's at Donnington Park (2016) I was quite taken with the casualty marker dials from Warbases. A little later in the morning I saw the beautiful Donnington Miniatures ECW/TYW casualty figures. And so a plan was hatched.

Couple of days later I sat down to paint up the dead people. Comparing them to my 'not-dead' figures they were massive. Why hadn't I waited and ordered some from the same range as my other figures? That's what you get for impulse buying!

So someone picked up a bargain on fleabay, and I ordered some replacement casualties, which is what I should've done in the first place. Pack has three figures - a musketeer, a harquebusier and a generic type figure. Paint up easily, based on the dials with a bit of fancy stuff to jazz them up a bit. 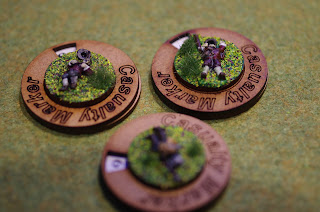 This wasn't a case of just buying on impulse, I really didn't think things through and needed a second take on my casualty markers, and a third.﻿
If you enjoyed reading this, or any of the other posts, please consider supporting the blog.
Thanks.
figures Parliamentarian Royalist Warbases