- 15 November
As Vic Reeves and Bob Mortimer oft said "you wouldn't let it lie". Clearly I haven't. Whilst perusing the Warbases' website I noticed that they make custom casualty markers; identical to the ones I already owned but with the text of your own choice. Nice idea I thought.

That bit of knowledge sat in the back of my memory, slowly formulating an idea: wouldn't it be really good to have casualty markers with custom messages for each faction? Nice idea but preposterous! I'd have to rebase all my casualty figures, then the cost of doing it, plus there's nothing wrong with my current markers.

But, like an itch that needs to be scratched... well, I scratched.

First of all, I needed a font, and also could Warbases 'do' different fonts? They could, and I found a suitable seventeenth century pamphlet style font: Chapbook italic.

Chapbook font is available to download here - CAUTION downloading fonts can leave you open to malware and other nasties, ensure your virus/anti-malware software is up to date, and you do so at your own risk. In other words don't come running to me if it goes pear shaped!

Next issue: suitable slogans for each faction. I peddled the idea on a few fora, asking for suggestions, thank you to everyone who contributed. Helped me firm up my ideas.

I went for:
Parliament "for God and Parliament" 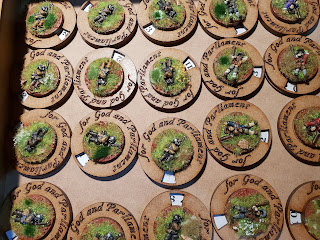 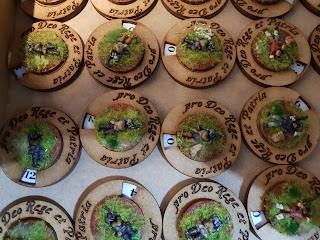 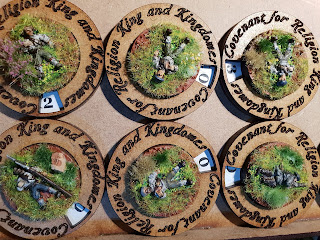 Warbases were very helpful and managed to turn my custom order around in about a week. Impressive and recommended!

The only downside was the slightly laborious task of rebasing my casualty figures, although by doing so I was able to rectify using the wrong flock, and completely overlooking muddy bits. So they now match the rest of my basing.

It would have been so much easier (and cheaper) if I had put a bit more thought into how I wanted my casualty markers at the start.
If you enjoyed reading this, or any of the other posts, please consider supporting the blog.
Thanks.
Covenanters figures Parliamentarian Royalist Warbases