- 11 November
Please note: the National Portrait Gallery will close on 29th June 2020 for a major redevelopment, reopening in 2023. So if you haven't visited, you'll need to get a wiggle on.

A few days in town tramping the tourist trail made me wonder what does our capital have to show us about the Civil Wars?

First let's look at the National Gallery: this is a wonderful resource for researching clothing colours, you can see my thoughts and research here.

The National Gallery has a large collection of Van Dyck's portraits. His famous equestrian portrait of Charles is not currently on display, as they are currently renovating a number of the renaissance galleries: hopefully, this will soon be back on display.

Currently there are a number of Van Dyck's portraits of the extended royal family on display, including: 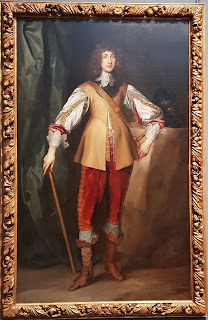 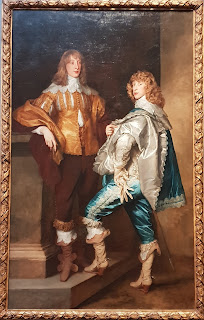 The National Portrait Gallery has a whole gallery devoted to the Civil War (and a better café too).

The stand out artworks are: 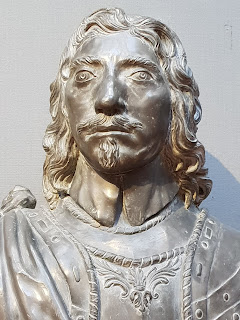 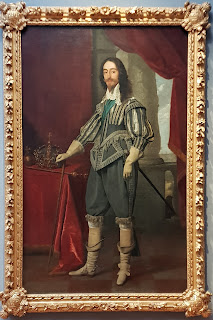 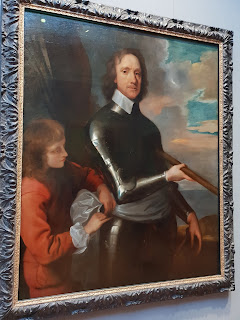 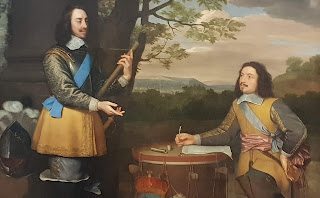 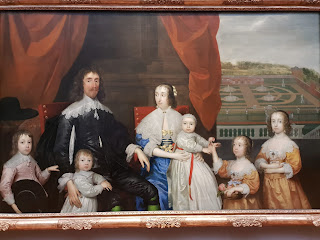 Immediately outside the National Gallery,  looking down Whitehall is an equestrian statue of Charles I. This statue was supposed to have been destroyed by order of Parliament; the metalsmith instructed to break it up instead hiding it until the Restoration, when it was installed upon the site of the Charing Cross, the traditional centre of London. 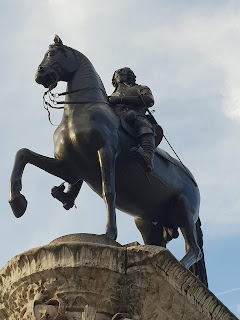 A short walk down Whitehall, past the throngs queuing to take a picture of the horse guard sentries is Banqueting House.

Little is visible of how Banqueting House would have been when Charles exited it for an appointment with an executioner. Commissioned by James I, Banqueting House has been remodelled to keep abreast of architectural fashion, one of the few remaining original features is the main ceiling painted by Rubens for Charles. 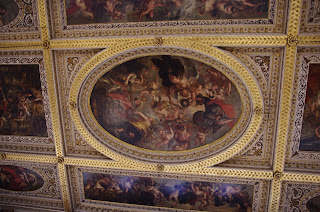 Ruben's ceiling, best viewed from a beanbag on the floor. 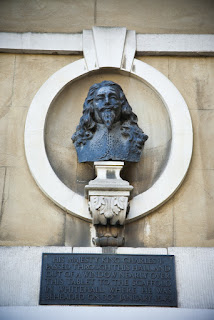 Above the visitors' entrance is a memorial marking Charles's execution. 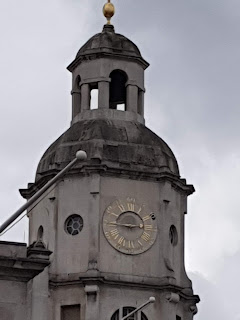 Opposite this bust is the archway to Horse Guards Parade. On the arch is a clock; there is a black mark next to two o'clock (marked '10'), which, so the story goes, is there to commemorate the time of Charles's execution. 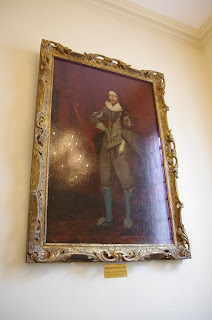 As you climb the stairs to enter the Banqueting Hall, you are faced by a full length portrait of Charles. This portrait is located at the site of a former window, from which Charles exited the building to his execution scaffold.

Whilst on the subject of galleries... There is an exhibition of the work of William Dobson at Tate Britain. Following the death of Van Dyke in 1641, Dobson became a painter at the court of Charles I. Runs until the 28th of April 2019. I missed it on my recent trip, will certainly visit on Salute weekend (assuming boys are fit and healthy - Salute 2018 coincided with the last weekend of Charles's art collection being reassembled by the Royal Academy, I'd purchased tickets but it was not to be #3 son was 'bit poorly'.)