- 19 November
A confession: I have watched this film. I therefore apologise to everyone that knows me, and will no doubt burn in hell for all eternity as a consequence 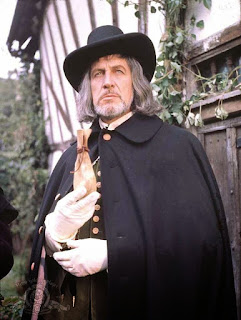 Described on Wikipedia as a 'cult film', this is clearly a reference to how pants this film actually is: it is absolutely dire. When released there was consternation as the plot of torture and saucy thrills was deemed too much for audiences. Starring Vincent Price as Matthew Hopkins, an appearance by Wilfred Bramble ("'arold, 'arold") as a horse trader, and a host of young ladies screaming in what can only be described as a Carry On style. I am impressed by how shoddy the uniforms of the New Model Army cavalry troopers are: grey felt armour is possibly the highlight of the film.

The film exudes low budget, awful script and wooden acting. If for some reason your interest is piqued by this, it is available on DVD and Blu-ray, or pop over to YouTube where the whole film is available gratis.

Just don't. Trust me.
If you enjoyed reading this, or any of the other posts, please consider supporting the blog.
Thanks.
Film & TV