- 30 December
Having posted pictures of my attempts at painting thatch, which I thought were quite good, I realised how shoddy they actually were. Possibly the greatest benefit that this blog has given me is the sight of my own painting attempts super-enlarged in all their gory detail. I knew that my Peter Pig thatch was awful and needed redoing, but I had thought that my Hovels medieval range thatched buildings were 'okay'. Wrong!

So after much experimentation I came up with the following recipe for painting thatch. They look right for 15mm, maybe supersized on tablet or laptop screens might do them an injustice.

Basecoat: RailMatch 'worn tarmac' a mid to dark grey. Once applied it looks just wrong, and I understand why many people turn to the yellow and brown palettes.
Next up was a very heavy drybrush with Foundry Moss 29B. A green brown,  it toned the grey down considerably but seemed much brighter than I hoped for.

Final step was a glaze of Windsor and Newton nutbrown ink. My first two 'test pieces' were the two Peter Pig buildings. A good coat of Coat d'Arms Matt varnish and I was happy. 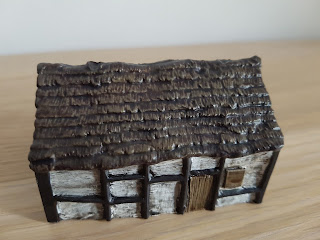 Then I decided to take the plunge with the  Hovels buildings. They have a very different sculpting style of thatch, which I think might explain the difficulties I ran into. Followed the same procedure, but they looked completely different. Way too brown. Another glaze of Windsor and Newton black ink this time, wiped off with kitchen roll. This gave back the grey/brown effect that the Peter Pig buildings had, and that I wanted. 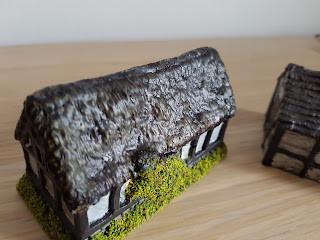