Where It All Began...

- 22 December
It began in a car park in Macclesfield about 40 years ago. A Saturday shopping trip to Treacle Town started a fascination with events 350 years (or so) that has lasted a lifetime. So it's all the Sealed Knot's fault. Or the ECWS. One of the two.
Under my dad's Vauxhall Viva windscreen wiper was a flyer for a battle reenactment at Lyme Park. Much to my father's chagrin (he hated anyone fiddling with his car, and believe me putting anything under his wiper bade was very much in the 'fiddling' category) a 9 year old me was fixated with the imagery used, which led to "mum, dad, can we go please?" Needless to say we did go to the reenactment, and I loved every minute of it.

The imagery used was the Battle of Naseby engraving (Streeter's Plan), the representation of the troops was right up a 9 year old's street, and has stayed with me ever since. 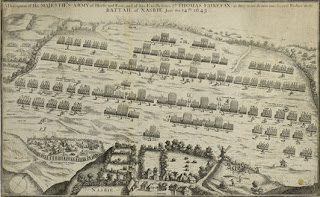 A brief dalliance with 1/300th Heroics and Ros ECW figures (very badly painted) in the early '80s, was ultimately put on one side when I discovered 15mm Napoleonics. Which in turn were put on one side when I discovered sailing, beer, females, rock climbing. A politics degree led to a fascination with the Levellers, the Diggers and the Ranters, before work, children, mortgages pushed this to one side too.

A reawakening of my interest came about, thanks to the Sealed Knot (they have a lot to answer for!). Not being 'in to' dressing up, thoughts turned to 15mm pewter figures again.
ephemera