The last of the Royalist regiments of horse to take their moment in the spotlight.

Sir Charles Lucas is probably most famous for his execution, or "The Loyall Sacrifice" as the Royalist newsbooks would describe it.

Charles learned his soldiering, as so many did, in the Netherlands during the 1630s, before returning to fight in the Bishops' Wars. He would be knighted for his efforts in 1639 and be appointed governor of Richmond (the Yorkshire one). 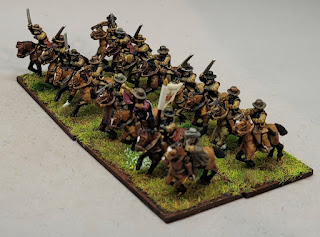 As the King was raising his banner, Sir Charles would raise his Regiment of Horse. The Regiment would have their first taste of combat at a skirmish at Padbury; followed by First Newbury; Hunsborough Hall; Bradford; Boldon Hill; Chester-le-Street; and Marston Moor. Lucas would be wounded and taken prisoner. He would help to identify the eminent Royalist dead for honourable burial. It is said he wept at their numbers.

Lucas was be a beneficiary of a prisoner exchange during the winter of 1644/5; and he would be appointed governor of Berkeley Castle not long after.  he would defend the castle against Colonel Rainsborough during a brief siege in September 1645. In 1646, Lucas was second-in-command to Sir Jacob Astley in the final Royalist campaign of the First Civil War. He was taken prisoner with Astley at Stow-on-the-Wold then released after giving his parole not to bear arms against Parliament in the future.

Summer 1648, the War reignites with a number of small uprisings across the country, and a Scottish Engager army cross the border. Charles is a prisoner at Carisbrooke Castle on the Isle of Wight. Colchester, and the county of Essex, which had been firmly in the grip of Parliament during the First Civil War, was slowly falling to Royalist rebels: nearby Chelmsford was in the hands of Sir Charles Lucas. Meanwhile, a failed uprising in Kent saw Kentish men flee across the Thames to join Lucas at Chelmsford. For more information, the story of the siege, Lucas' execution, and a visitor's guide to Colchester see here.