Yet another confusing journey attempting to work out which Forbes we are talking about: why do landed families always give their offspring the same names?

After several false starts with my research, I realised that these lancers were in fact Lieutenant Colonel Arthur Forbes of Echt 's Troop part of the Master of Forbe's Regiment of Horse.

William Forbes, the Master then later Lord of Forbes would raise a retinue for the First Bishops' war, again for the Home Army, then various regiments from 1648 onwards. He would raise the Master of Forbe's Horse, the Lieutenant Colonel would be Arthur Forbes of Echt. 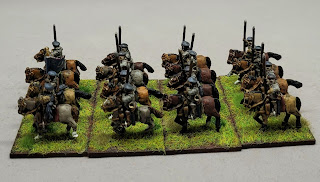 Both William and Arthur were loyal Covenanters, having supported and raised men for the Covenant since 1639.

Raised in Aberdeenshire and Banffshire, they were soon ordered to Perth where their numbers swelled. Seemingly a bunch of ne'er do wells, a number of their men appeared before the Presbytery Courts for getting up to mischief (in other words fornication, having babies out of wedlock etc). Other than that they moved around a fair bit, eventually fighting at Dunbar. It is not clear what happened to the Regiment after Dunbar. 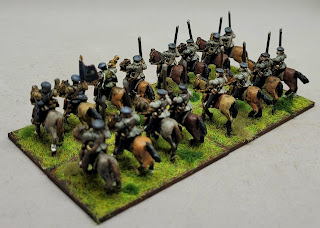 They resurface in 1651 as Lord Forbes' horse: more scandalous behaviour ensues before they march south to their destruction at Worcester, where Lord Forbes is captured.

I've depicted them as lancers, wearing Hodden Grey: the lancers are straight out of the bag, command is PP helmet command with some headswaps, cornet from Maverick Models, bases from warbases.

If you enjoyed reading this, or any of the other posts, please consider supporting the blog.
Thanks.
Covenanters figures Peter Pig Regiment of Horse