A regiment of horse from the King's Oxford Army, that took an absolute hammering at Cirencester in September 1643: Cirencester had been taken by Essex in 1642, before Rupert recaptured the town in February 1643. Essex would again retake the town for Parliament in September 1643. Crispe's Regiment lost a number of cornets with white fields and black and white fringes at Cirencester; they are recorded in a muster in April 1644 as being four Troops but only having one cornet (in theory colours could not be flown by a troop or company that had lost their colours until they had captured a colour from the enemy). I've represented them carrying the cornet of Sgt Major Christopher Wormsley's Troop. 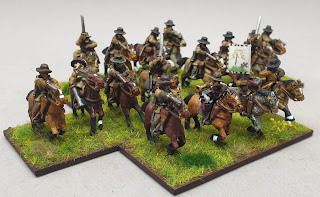 Crispe was the son of a London Alderman, and at the outbreak of war he was an important Royalist agent in London, before he fled the capital to Oxford when an intercepted letter revealed that £3700 was owed to him ‘for secrett service done for his Majestie'. Commissioned to raise a regiment of horse in July 1643, the regiment would serve as part of Cleveland's brigade. Crispe wasn't with his regiment very often, preferring to spend his time attending upon the Queen.

Crispe had made his fortune through the East India Company and the Guinea Company. His trading interests (not to forget his fleet of ships, and substantial wealth) meant he was commissioned (and funded) a fleet of fifteen warships which ferried troops to and from Ireland, as well as bringing much needed armaments into the country. 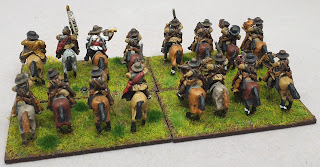 After Charles I's execution, Crispe would fund and raise funds for the future Charles II, and was one of the committee members sent to Breda to meet Charles. Upon the Restoration much of his monies lost were reimbursed by the Crown, and a number of high offices given to him.

When he died his body was buried at St Mildred's in Bread Street London (which was destroyed during the Blitz), his heart was laid to rest inside a casket under a bust of Charles I at St Paul's Church, Hammersmith. Victorian redevelopment saw his body and heart reunited in a new tomb in the churchyard of St Paul's in 1898.