This incarnation of Rossiter's Regiment of Horse is their New Model Army guise: the earlier form of the Regiment carried cornets with a black field, upon joining the NMA they were given new cornets with a white field. I've given them Captain Owen Cambridge's troop's cornet - we know the designs of six cornets belonging to different troops. 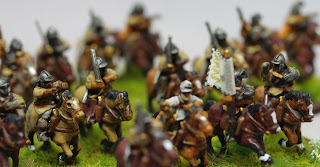 Rossiter would hand over command of the regiment to Colonel Philip Twistleton in 1647 after he was dismissed from the army for his support of Parliament in its disagreement with the Army about the King's captivity at Holdenby House*. Rossiter's Horse had escorted the King to Holdenby House and were part of the guard once he was at Holdenby. 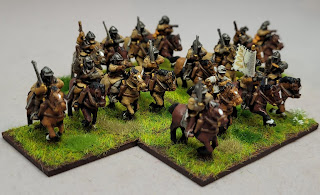 Present at Naseby and the siege of Leicester; Rowton Heath; skirmishing at Belvoir Bridge and Walton; Preston; Winwick Pass; they invaded Scotland with Cromwell, fighting at Dunbar; they returned to England fighting at Worcester; they returned to Scotland and took part in a couple of skirmishes at Bothwick Brae and Dunkeld before coming back to England in 1655. Sent to suppress Penruddock’s rising in 1656 they almost disappeared in 1659 (some troops became dragoons, others refused to serve), until General Monck reorganised them. They returned from the north of England and were quartered in London until they were disbanded in October 1660.

A number of headswaps with this unit, and a mounted casualty; cornet, as always from Maverick Models.

I also think I have done really, really well not to make any reference to Rising Damp, Rigsby or the late Leonard Rossiter during the writing of this post.

* Parliament had placed Charles at Holdenby, the Army objected to the King being held so close to London.

If you enjoyed reading this, or any of the other posts, please consider supporting the blog.
Thanks.
figures headswaps Maverick Models Parliamentarian Peter Pig Regiment of Horse