- 07 September
Another interesting local (to Château KeepYourPowderDry that is) regiment. Sir William was commissioned as a Captain of Horse in 1642 - Manchester University holds his original commission. He and his troop fought at Brentford, it is thought he may have raised a second troop in and around London before returning to Cheshire. 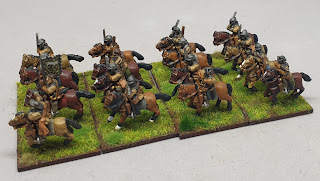 I have chosen to represent the Regiment with Sir William's own troop, as we know what his cornet looked like, and we also know that he purchased black taffeta trumpet banners in 1643. A number of headswaps with this unit, mostly for lobster pots with open visors. These were finished ages ago, and were sat waiting to be based for a long time - no idea why, as I quite like basing.

In May 1643 two different sources described Brereton's own troop as cuirassiers during the assault on Stafford Castle.

For a much more in depth history of the Regiment, and more details of the other troops and officers I will heartily recommend"More Like Lions Than Men" by Andrew Abram, the only weak link in the book is the colour reproduction with some of the illustrations. 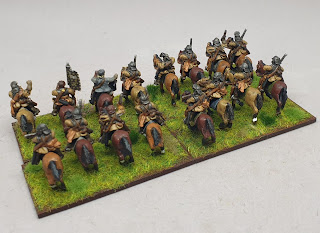 Brereton stepped down as Colonel due to the Self Denying Ordinance, Lt. Colonel Jones taking command in June 1645, and the Regiment went on to fight at Rowton Heath; returning to the Siege of Chester; possibly at Denbigh Green.

In March 1646 Jones was made Governor of Chester and command passed to Mytton. Under his command the Regiment moved into North Wales, participated at the Siege of Caernarvon before being reduced in October 1646. One troop continued in existence until June 1647.
If you enjoyed reading this, or any of the other posts, please consider supporting the blog.
Thanks.
figures Maverick Models Parliamentarian Peter Pig Regiment of Horse