Written histories of the Irish Brigade tend to have been fabricated by the Victorians who littered this history with romantic frilly nonsense.  Little is actually known about the 1,500 men of the Brigade.

The Irish Brigade were sent to Scotland in order to support Montrose by the Earl of Antrim. Three regiments made up the Brigade, this regiment was commanded by Colonel James MacDonald. Not much is known about James, he is quite possibly the illegitimate son of the Earl of Antrim, but that is by no means definite. The Earl had three sons prior to getting officially married - James is most likely the youngest of the three. 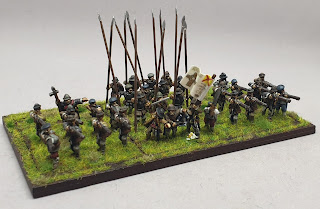 Raised in 1644 they were shipped over to Scotland and almost immediately took to the field at Tippermuir where they mustered 400 men; they then fought at Aberdeen; by February 1645 at Inverlochy their numbers had halved to 200; they fought at Auldearn, Alford and finally Kilsyth. What remained of the regiment is unknown, but we do know that James returned to Ireland where he led the regiment into battle again at Knocknanuss (November 1647), for the Catholic Confederacy. 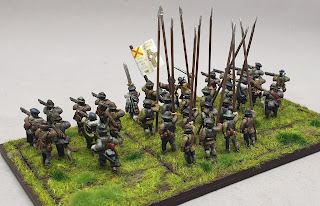 These are pretty much straight out of the bag, augmented by a Scots highlander officer (waving around a big sword), two halberdiers (one with a headswap for an Irish hat), three lowland musketeers and two highland musketeers. Somewhat annoyingly the Irish pike open hand pack aren't open handed - you're still going to have to drill their hand out (very easy to do, but if a pack is advertised as open hand I don't expect to have to drill hands out). The pikemen are slightly taller and thinner than my other figures: hopefully this is just a one off and not scale creep. Generic musketeer casualty with paint conversion legwear with a custom casualty marker from Warbases. 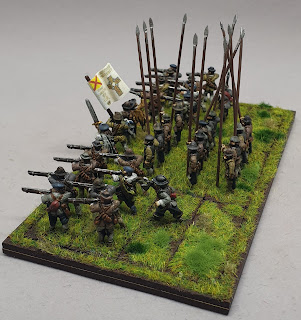 They carry one of the known Irish Brigade flags - alas we don't know which regiment carried which colour, so I picked three of the six described flags and assigned them at random to my three Irish Brigade regiments. Flag, as always, from Maverick Models.

If you enjoyed reading this, or any of the other posts, please consider supporting the blog.
Thanks.
Army of Montrose figures Maverick Models Peter Pig Regiment of Foot Warbases