Regular readers (hello both of you) will be familiar with Sir Arthur and know all about how he earned a spot in the Horrible Histories 'stupid deaths' hall of fame.

His Regiment of Horse were raised in Oxfordshire and the North in 1642 after the Battle of Edgehill; they took part initially garrisoned Reading; they took part in a skirmish at Henley-on-Thames; the siege of Reading; a raid on West Wycombe; a skirmish at Padbury; they stormed Bristol; the siege of Gloucester; a skirmish at Aldbourne Chase; First Newbury; before they garrisoned Oxford. In September 1644 field command of the Regiment passed to Lieutenant Colonel George Boncle who led the men at the relief of Basing House; the storm of Leicester; and Naseby. George was captured at Naseby and his brother Sebastian Boncle took over command. The Regiment continued but their service is not clear; possibly remaining as part of the Oxford garrison.

This is the last of my planned Royalist Regiments of Horse, giving a grand total of 320 figures, which is a heck of a lot of brown paint. I certainly won't miss painting the one piece sculpts, positively hate them. Just the one headswap here: he's been given a secret fabricated from a head wearing a Monmouth cap filed down. If you aren't familiar with the term, a secret was effectively an armoured skull cap worn under a normal hat. There are some images of examples here toward the bottom of the page (before the lion armour pictures).

As these could well be my last Royalist cavalry troop I threw my own colour 'rules' out of the window and gave them black saddle blankets. Reading about Aston I come away with two impressions of him - he was a bit of  a show off (so having black blankets would fit), he also comes across as somewhat self centred (which would suggest he might have been a bit of a penny pincher, so black blankets highly unlikely). But black blankets it is, matching the cornet; plus, they are so small you hardly notice them. 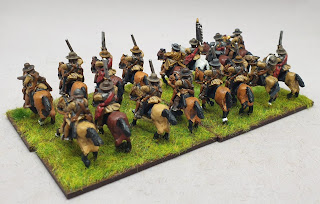 The weather wasn't behaving when I came to finish these figures off, which meant I had to resort to brush on varnish (Vallejo matt). I mustn't have shaken the bottle enough as the matting agent frosted on a couple of figures (normally I use spray varnish and only get frosting when I am a little too liberal with my application). Thankfully saved with the old coat of gloss then a coat of matt trick.

If you enjoyed reading this, or any of the other posts, please consider supporting the blog.
Thanks.
figures headswaps Regiment of Horse Royalist