The opening salvo in the Warwickshire Houses of Interest post takes in a moated medieval manor house. Expect the #ECWtravelogue to concentrate more on the west midlands in the coming years as the academic focus (aka dad taxis & removal services) of Château KeepYourPowderDry shifts to Coventry and Warwick.

Baddesley Clinton is a hidden gem of a property: located half way between Solihull and Leamington Spa, the house is cared for by the National Trust. So expect plant sales, café and over priced fudge. Dating from the 13th Century, Baddesley Clinton was home to Henry Ferrers, noted antiquarian. Henry died in 1633 and the house was inherited by his son, Edward. Edward would be made High Sheriff of Warwickshire 1639-1641.

The Ferrers were Catholic recusants, and whilst they did try to keep out of the wars and remain 'neutral' their notoriety as Catholics positioned them in the 'probably Royalist because they are Catholic' category. For this reason the family and estate were heavily 'taxed' by Parliament's men. The volunteer guides at the property are barely able to hide their disdain for this 'taxation' by Parliamentarian soldiers. 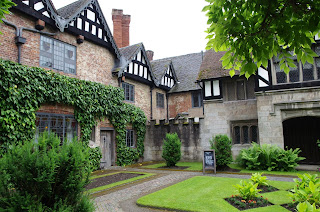 There are a number of contemporaneous accounts listing the spoils of these raids: 'a plush saddle', gunpowder and a musket. a Geneva Bible, 'a gelding of bright bay colour', and 'many linens out of ye drying chamber'. After the Wars Edward submitted a compensation claim of £375 (worth about £40k today); alas, we don't know if he received this money. The Ferrer's coffers don't appear to have recovered after the ravages of the Wars.

By a process of deduction the most likely contenders for this plundering could be Colonel William Purefoy's Regiment of Horse (so if you decide to represent them, make sure that there is at least one bright bay horse just in case): but this is by no means certain.

What's there now? Much of the history of the property has been embellished by... you guessed it, the bloody Victorians.

A fine example of this 'embellishment' is the blood stain on the floor from the house's 'medieval murder scene'... a conversation piece created from pig's blood, appearing in the nineteenth century (the murder did take place, but no pigs were harmed).

Much of the artwork on the walls was painted by the self taught Rebecca Ferrers in the 1870s.

There is a zischagge, cuirass and buff coat on display: these appear to have been left behind by those beastly roundheads. The real star of the show is the beautiful house, set amongst stunning gardens and landscape. 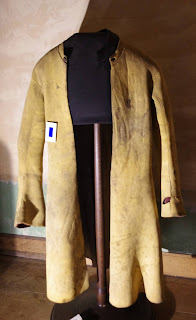 Please note: if following a SatNav to the property, once you pick up the brown direction roadsigns, follow them and ignore the SatNav. The SatNav will try to route you via some very narrow country lanes.
Postcodes for SatNavs
Baddesley Clinton, B93 0DQ
If you enjoyed reading this, or any of the other posts, please consider supporting the blog.
Thanks.
ECW Travelogue Houses