Not a 'new' Regiment, but another in the series of 'briefly mentioned, I'd better go into a bit more detail'. So here is fifteen minutes of fame for the Earl of Buccleugh's Regiment of Foot. Later known as Colonel Walter Scott’s, then Colonel William Baillie’s Regiment of Foot, they were also known as the Tweeddale Foot.

The Tweeddale Foot were raised in August/September of 1643 by Francis Scott, the 2nd Earl of Buccleugh (now spelled Buccleuch). The majority of its men came from the presbytery of Selkirk. Numbering 1200 men they joined Leven's army in January 1644 and marched south into England.

Their first engagement was at the Battle of Hylton to the west of Sunderland (probably better known as the Battle of Boldon Hills), closely followed by joining the besiegers of York. They were brigaded with Loudon's Glasgow Foot at Marston Moor, but fled the field after being broken by the left wing of the Royalist horse. 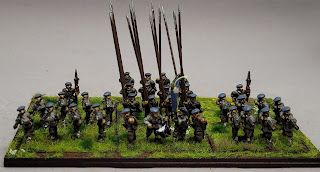 They were then quartered in South in Yorkshire, before marching north to besiege Newcastle. The regiment joined the Covenanter's field army and marched south besieging Hereford, and Newark. After the fall of Newark they were quartered in Northumberland 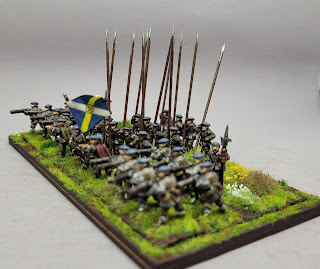 In January 1647 Walter Scott commissioned Colonel, the regiment he formed  became part of the Scots New Model Army, and it is believed that many of the 'original' Tweeddale Foot joined this new regiment. They may have fought in the north-eastern campaign of 1647.

Walter Scott would be imprisoned in Edinburgh tollbooth for his opposition to the Engagers; he would petition for, and be granted, a pass to leave for the continent. Lieutenant General William Baillie would take over command of the regiment on Scott's departure.

They would fight at the Preston and Winwick Pass. When they capitulated to the New Model Army at Warrington they numbered just 128 officers and men. 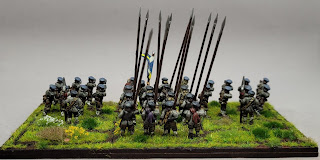 These are straight out of the bag PP Scots lowlanders (pikemen having to have hands drilled out as PP don't make lowland pike open hand), with the exception of the halberdiers. They are lowland artillery men with Donnington halberd heads attached (EQ49 TYW Halberd (Partisan)).  Flag as always, from Maverick Models; in this instance they carry the second captain's colour.
If you enjoyed reading this, or any of the other posts, please consider supporting the blog.
Thanks.
Covenanters Donnington figures Maverick Models Peter Pig Regiment of Foot