Another regiment that appeared only fleetingly: a Covenanter Regiment of Foot raised for the Bishops' Wars, then seeing service in England, Scotland and in the Second Civil War

Originally raised in 1638 in Peeblesshire, they were involved in the capture of Dalkeith House, before they joined Leslie’s army at Duns Law. They were disbanded following the Treaty of Birks in June 1639. 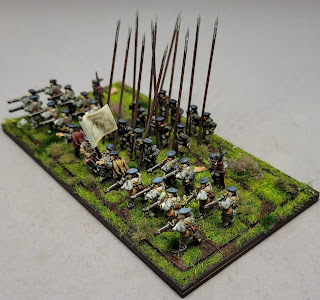 John, Master of Yester, received his commission late August 1643 to raise the regiment anew in Linlithgow and Tweeddale presbyteries. He selected a professional soldier, William Johnston, as his lieutenant colonel. The Master of Yester would spend most of 1642-3 accompanying the Royalist army in England. The regiment marched south into England and engaged in their first combat by storming the fort at South Shields. They would serve at the siege of York and Marston Moor, where they were brigaded with the Stirlingshire Foot in the Scottish second line. After Marston Moor they marched to Leeds. They would return north to besiege Newcastle. It isn't known what happened to them after the siege of Newcastle although 24 men were garrisoned at Warkworth Castle. A small detachment of 60 men were sent to siege of Carlisle. This incarnation of the regiment would be disbanded in February 1647. 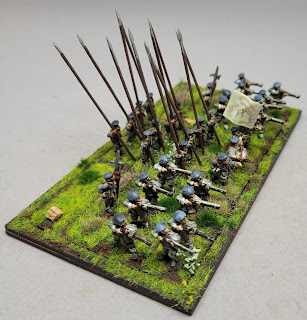 In May 1648 the Master and the Laird of Waughton were commissioned  to raise the regiment anew in Haddington and Tweedale. Waughton refused the commission and the Master became sole colonel. In July some of the soldiers entered Oldhamstocks Kirk and made a great deal of noise before the minister entered. One man standing upon the stool of repentance. The disturbance was ended by some men from Lauderdale's Horse. 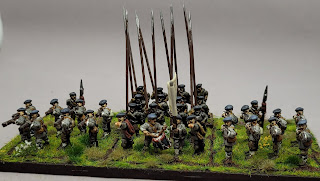 In July, the regiment marched south into England, where they fought in the Preston campaign. The remains of the regiment, 81 men and officers surrendered to the New Model Army at Warrington Bridge. The Master fled back to Scotland 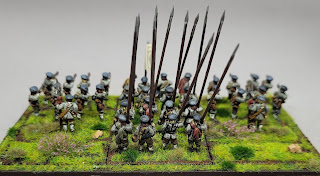 Pretty much straight out of the bag: pikemen have had their hands drilled out, and the halberdiers are artillery men with added halberd heads from Donnington. They carry the colonel's colour, from Maverick Models.
If you enjoyed reading this, or any of the other posts, please consider supporting the blog.
Thanks.
Covenanters Donnington figures Maverick Models Peter Pig Regiment of Foot