- 07 March
When I planned my Army of Montrose, it was, as in real life, quite cavalry light. A unit of lancers and a unit of harquebusiers (for the Gordon Horse). But... well I fell down a rabbit hole... and, discovered the intriguing story of Captain Frances Dalyell alias Mrs Pierson. Well, once I knew about her, it just had to be done a Frances in 15mm. It was intended to be the final Montrose unit to be painted, unfortunately I  was in headswapping mode and needed to scratch that itch. So here they are. 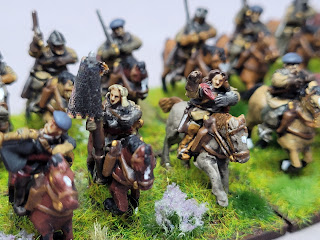 Captain Frances Dalyell, alias Mrs Pierson, was reputedly the illegitimate daughter of the Earl of Carnwath. There are many contemporary tales of women dressing as men and serving in the Wars, so many that Charles had a draft proclamation drawn up, setting out required standards of behaviour for Charles I’s army. It included a hand-written memo in the margin from the king himself stating "lett no woman presume to counterfeit her sex by wearing mans apparall under payne of the severest punishment". Many of these tales appear to be hearsay, and propaganda (plus nearly 400 years later many stories have been exaggerated out of all proprtion by the Victorians). However, one such story that appears to be true is that of Frances Dalyell. See here for full details, and a wider investigation into women fighting in the wars. 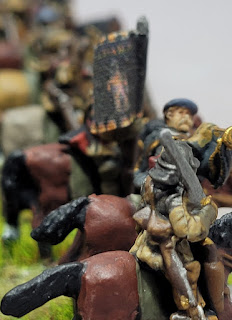 Frances led her troop on Montrose's brief campaign to Dumfries in April 1644. Mark Napier in his 'Memoirs of the Marquis of Montrose' speculates that she may have been the author of an anonymous account of the Earl of Newcastle. A Frances Dalyell (alias Mrs Pierson) is reported as being a captain in Lord Eythin's Regiment of Horse in March 1644 prior to the Battle of Bolden Hill, with a black cornet bearing the motto I DARE. 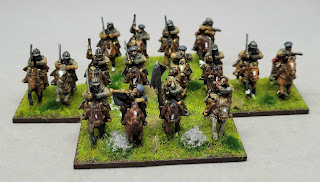 She appears in Indigent Officers (quoted in Reid's Cavalier Army Lists) listed as serving in Lord Eythin’s Regiment of Horse. It seems that her troop joined Lord Eythin's horse before the fight at Bolden Hill in March 1644 then accompanied Montrose on his expedition, perhaps as part of or attached to Crawford's Regiment of Horse.

Obviously, there are quite a few headswaps with the unit: the most notable being the officer figure has been given a female head. I also decided to give the cornet a female head, no historical evidence that there were any other women serving in the troop, just thought it would look better. Then there are quite a few blew bonnets given to the rank and file. Of course their casualty figure required a headswap too - one of my more ridiculous ideas, that is incredibly dangerous. Why did I think that all Scot's cavalry casualty markers needed blew bonnets? 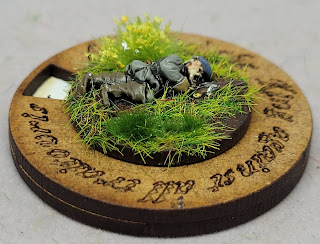 I think Stuart at Maverick Models quite enjoyed being tasked with creating the flag - he was quicker than usual! 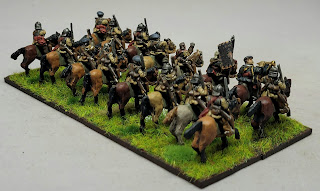 If you enjoyed reading this, or any of the other posts, please consider supporting the blog.
Thanks.
Army of Montrose figures headswaps Maverick Models Peter Pig Regiment of Horse Royalist