Scotland the Brave: A Work in Progress

- 22 February
I know, I know, I did say out loud that I wasn't going to build a Covenator army. I hold my hands up: guilty as charged your honour!

Bit of a tricky one this. The manufacturer of my figures does do a range of Scots, but in comparison to the English it is quite limited. The biggest issue is currently there are no lowland pikes open handed.

At the moment I've planned on three regiments of foot, a couple of generals, a preacher, and an Earl of Leven figure with standard.

I've already mentioned the issue with the pikemen; musketeers, sadly, only come in one pose, and there are no halberdiers. The lowland musket pack was a big influence in my buying into the PP range at the start. They are beautiful figures. Just a bit of a shame there are only three variants of the firing pose (unlike the English musketeers who have rests or not, are loading/standing/firing/marching/waving their muskets in the air/ and have a variety of hats).

Command stand is covered by a pack, but what of the halberdiers? I could have just added extra officers, but I really fancied a little more variety. A quick peruse of the range throws up the lowland artillery crew: there is a chap standing with an upright ramrod. If I cut the ramrod flush with his hand I'm sure a halberd head could be fashioned. Which way to go? Green stuff? The paper PVA'd over wire trick? Or cut some halberd heads off and pin them in place? 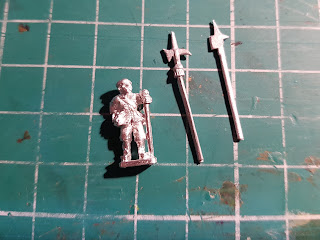 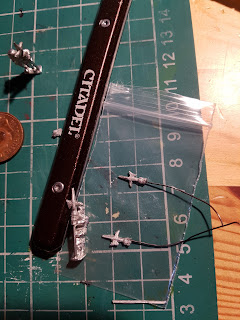 Casualty markers? There is a pack of highland casualties - one of which is wearing trews  (as opposed to a kilt). 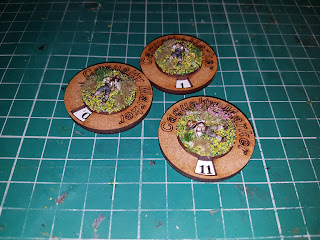 Must confess there is a very definite air of dead Morris dancer about them. Probably just a result of my colour scheme.

If you enjoyed reading this, or any of the other posts, please consider supporting the blog.
Thanks.
Covenanters Donnington figures