- 21 March
One of the reasons I started this blog was as a repository for all the scraps of paper that constituted my notes/research for this project. This post is, therefore, a blatant example of a note from me, to me. It is an attempt to save myself having to go and measure bases every time I want to order some more.

Basing is a bugbear of many gamers: rulesets are often very specific as to the number of figures to bases ratios, and base sizes. I can see the point for competition gaming, or gaming against a number of regular opponents. As I don't do any of that sort of nonsense, and provide both sides, as long as I am consistent there isn't really a problem.

For a while I was particularly taken with using Citadel Stirland Battle Mud (not Stirland Battlemire, which is really thick and paste like) textured basing paint (in other words mud brown paint with a drop of PVA and some grit in it). What I like about it is the all in one go bit of adding texture and colour. What I don't like is the price. So now I make my own with Miniatures Paint chestnut brown, some GF9 fine grit and a drop or two of PVA. The Citadel texture spatula is brilliant for putting it on, as both the Citadel and my version wears brushes out too quickly.

I want my armies to look like those represented by Streeter. Particularly my regiments of foot, which has led to thirty four man regiments (16 musket, 12 pike, 2 halberdiers, 2 officers, a drummer and a standard bearer). These are based in 4s on 40mm x 15mm bases (halberdiers have a base each), 12 bases fit a 120mm x 60mm sabot/movement tray (two are blanks to fill in spaces).

Firelocks: are based four figures to a 40mm x 15mm base, 6 bases fit a 120mm x 30mm sabot/movement tray, giving 24 men to a unit. These are my only units not to have a standard, they do however have an officer and a drummer.

Dragoons are represented on foot. There are 12 fighting men based individually on penny sized bases, these fit two 3 x 2 penny sabot/movement trays. Rather than having a token representative horse holder I decided to have 1:1 horses to men; one horse holder has three horses on a 40mm x 40mm base (of which there are six bases per unit); and a command stand of mounted officer, mounted standard bearer, drummer on foot and his empty horse again based on 40mm x 40mm. This gives a 21 man unit.

Cavalry is based on 60mm x 30mm bases, four horsemen to a base and 16 men to a unit; one stand having a trooper, officer, trumpeter and standard.

Siege engineers: based on penny sized bases, with a 4 × 2 movement tray.

Command stands: individual generals are based on 30mm diameter bases, commanders in chief are based with a personal standard bearer on 50mm diameter bases. Second in commands are identified by having a dog. Each side also has a preacher based on penny sized base.

Every unit has a casualty marker (40mm style A), complete with dead person.

Civilians: are based upon round bases, individuals on penny sized, small groups on 30mm diameter, and vignettes on 50mm diameter bases.

Clubmen: are based four figures to a 40mm x 15mm base, 6 bases fit a 120mm x 30mm sabot/movement tray, giving 24 men to a unit. Command is separate from units (to help give them an unorganised look) a drummer, standard bearer, a random citizen and a preacher share a 40mm diameter base.

On the underside of the bases there is an identification code system: this is purely so I know which base goes with which unit.

The top right corner has a faction colour code: Parliament is orange, Royalists are red, Solemn League and Covenant are blue, and clubmen are white. I have a sneaky feeling that Montrose and some Irish Confederates might come along at some point... 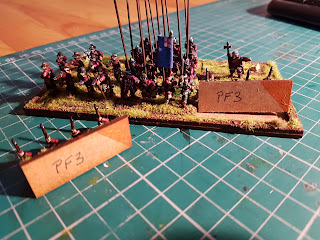 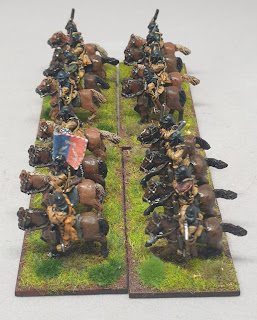