- 16 December
Once I had discovered that a relative was a captain in the Parliamentarian Holland's regiment, I had to represent it. This of course had the knock on effect of causing imbalance in my armies. Hence the King required a new regiment of foot to level this imbalance. So I give you Sir Bernard Astley's Regiment of Foot. 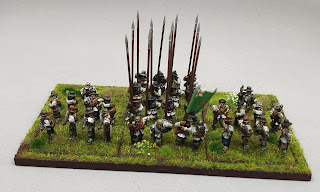 As the Marquis of Hereford's their highlights include Lansdown and Bristol; under Astley they fought at First Newbury(possibly), Cheriton, Cropredy Bridge, Second Newbury, Leicester and Naseby.


Peachey & Prince have  identified the regiment’s coat colour as white (by a process of elimination), however this relies on some unconfirmed assumptions. 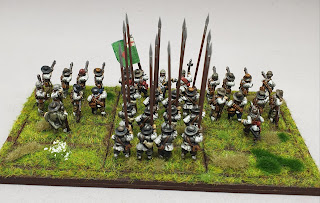 Richard Symonds was a diarist, who just so happened to be a member of the King's Troop of Horse. So he was ideally placed to record events including Cropredy Bridge, Newbury and Naseby. At the Aldbourne Chase muster in April 1644 he noted that Sir Bernard's regiment carried green flags with red charges and illustrated one plain green flag, one with a St George canton and one with a St George canton and red device. The device looks like a hawk lure; a red device on a green flag breaks the heraldic rules of the time (a colour should not be on a colour, nor a metal on a metal).

That's me sold - white coats, and a heraldic aberration for a standard.

I tried a different approach to painting these. Normally I slap paint on quickly, not worrying if I go 'over the lines' as I can tidy everything up at the end. These, were spray painted white, then coloured in carefully.
If you enjoyed reading this, or any of the other posts, please consider supporting the blog.
Thanks.