- 09 December
Who hasn't searched for themselves on Google? It's fairly normal behaviour I believe. So when you discover The Cromwell Association Online Directory of Parliamentarian Army Officers it has to be done really doesn't it?

Not really expecting to find a relative I was pleasantly surprised to find Captain Thomas Chetham of Colonel Richard Holland's Regiment of Foot. But was he a relative? A little bit of digging finds that he was a cousin of Sir Humphrey Chetham my great x lots uncle. So I'm not exactly what relation Thomas is - somethingth cousin many times removed I guess? 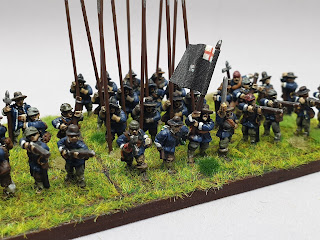 Richard Holland was a Member of Parliament for Lancashire, who raised a regiment of foot for the defence of Manchester in the Salford Hundred. Thomas was a captain in the regiment and  ‘fought both within and outside Lancashire between 1642 and 1646’. 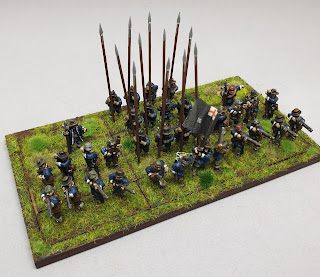 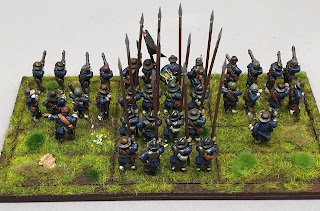 Other than that we know precious little about the regiment. But, it's got to be done hasn't it? I really do have to recreate my ancestor in miniature.

We have no idea of coat colours (or even if any were issued), or standards. Having looked into the defence of Skipton Castle and the garrison I noticed that family coats of arms could give some clues to coat colours and standards (although there is still a mighty big leap of faith required!).

The coat of arms of the de Holland family of Denton Hall is made up of blue and black quarters. 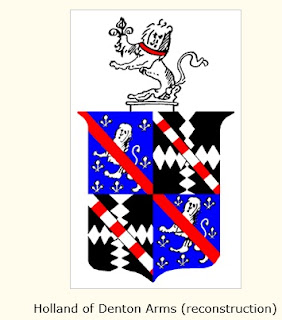 Black was far too costly a dye to equip a regiment with coats so I'm going to go for blue coats. The black could well be represented by a black standard. The easy option would be to go for Colonel's, or Lieutenant-Colonel's companies. But alas Thomas was a Captain. But we don't know of which seniority. I'm promoting him to first captain so one device. But what device? There are a number of variations of the coat of arms but all have the lion rampant upon a blue background with fleur de lys. Think I'll go for fleur de lys devices for a bit of a change.