After what seems like a very long break from painting I return to my last, currently planned*, Regiment of Foot.

So without further ado, let me introduce the White Regiment of Foot of the London Trained Bands. The second most senior regiment in the LTB, they were recruited from north of the City: Cornhill, Lombard Street, Fenchurch Street, and upper Gracechurch Street. An area of London populated by goldsmiths, financiers and wealthy merchants. 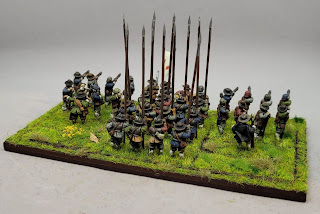 Their colonel, Alderman Isaac Penington had been elected as a sheriff of London in 1638, and would be appointed Lord Mayor when Parliament removed the Royalist Sir Richard Gurney from office in August 1642. In 1649 Penington would be made a commissioner of the High Court of Justice and attended the King's trial: he did not sign Charles's death warrant. He would surrender at the Restoration, hoping for leniency as he hadn't been a signatory of the death warrant. His lands were confiscated and he would spend the rest of his life incarcerated in the Tower, where he died in December 1661.

The Regiment were most probably present at Turnham Green; fought at Cheriton; fought at the siege of Bishop’s Waltham; they then returned to London never to venture out again in 'anger', they did line the processional route of Essex's funeral. 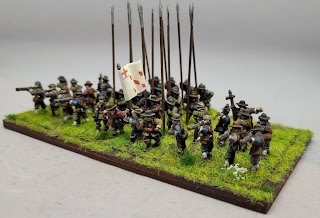 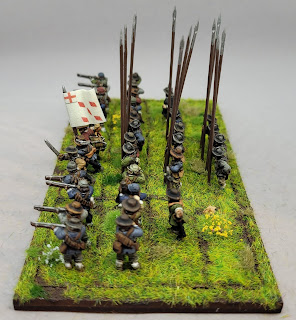 A number of headswaps with this regiment, mostly with the command figure. I was given one of the collectible General Coaker figures, who was given a head with a secret fashioned from a Monmouth cap. Flag as always from Maverick Models.

These are also the last of the figures that went astray, so it is good to have them finished.

* regular readers (hello both of you) will have heard this phrase a few times before, and, will take it with a pinch of proverbial salt

If you enjoyed reading this, or any of the other posts, please consider supporting the blog.
Thanks.
figures Maverick Models Parliamentarian Peter Pig Regiment of Foot Trained Bands