- 08 March
Here in Blighty we have had a little bit of weather, a good blast of polar continental air has brought carnage to a nation that feints at the sight of two snowflakes falling on its capital.

Here at Château Keepyourpowderdry we have been housebound for three days, with sporadic electricity supply and heating. So as mother nature has plunged us back into the 1950s I've been doing a lot of reading by candlelight.

On the occasions when the twenty first century has returned I've been online shopping for books. All I can say is my bank manager is probably very relieved that the council have cleared the 8' deep snow drifts blocking the only road in and out of my village.

Littlecote: the English Civil War Armoury by Thom Richardson and Graeme Rimer. A hefty, scholarly catalogue of the Littlecote Armoury, which is now preserved at the Royal Armouries in Leeds. Hardback, monochrome pictures. Update: now back in print! 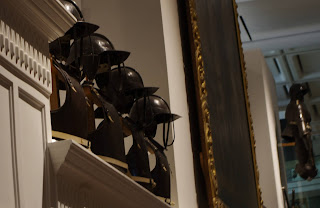 Part of the Littlecote Collection, displayed at the Royal Armouries, Leeds in the same way it was on display at Littlecote
Civil War London by David Flintham. Part of Helion's Century of the Soldier series. Similar in size and appearance to Osprey's publications. Brief history of the the London Trained Bands and Auxiliaries, the defences of London, and a history of London during the different phases of the war. Plus the London Civil War gazeteer: over half of the book lists civil war sites in London (with OS grid references), an illustration and brief description. Softback, monochrome pictures. 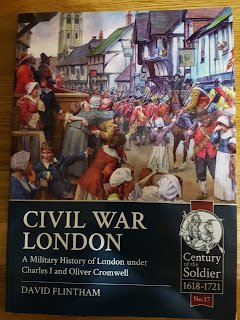 Cavalier Capital: Oxford in the English Civil War by John Barratt, another Helion Century of the Soldier. This time hardbacked,  with monochrome illustrations. Life in Oxford is described, the impact on the wars on the town; the personalities; life at Charles's court; and the siege.