- 26 August
Well frame guns actually. So not really cannons. Leven is reported as having 88 of the things in his artillery train in 1644, more than half the total number of pieces in the entire train.

Not surprisingly, no frames survive, and there are no records of what colour they were (descriptions are pretty scant too). We do know that the Scots treated their larger ordinance carriages with pine-tar, so an ochre colour is probably not too far from the mark. Scottish ordinance was usually bronze rather than iron favoured by the English foundries: the one surviving frame gun barrel is brass. In later years the Scots moved to iron pieces wrapped in leather, I have chosen to paint my frame gun barrels black. 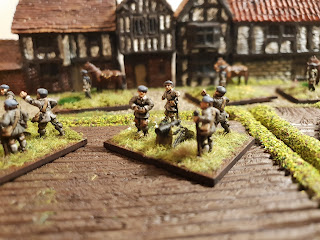 As you will be aware, my fighting men are all from Peter Pig. I knew that PP make frame guns and Scots artillery crew, the problem would be trying to find a suitable pack horse to carry the frame gun (in lieu of a limber). There's one in the PP WW2 British 14th Army section - albeit a donkey. That might work, but would prefer a pack horse.

Google results for "15mm pack horse" threw up a Magister Militum offering. Their 15mm figures are a reasonable size match to PP figures, and at first glance I thought it was a Scots dragoon horseholder and horses. When I could be bothered to actually read the blurb, it transpired that the horses are actually pack horses (explains the funny looking saddle). Nicely sculpted pose for the horseholder. 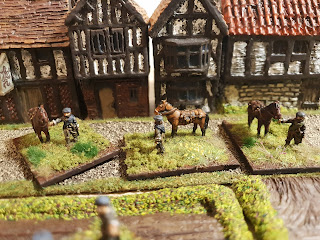 Basing... tricky one this. After much deliberation I plumped for 40mm x 30mm for the guns, with four crew: all my guns have 40mm frontages. With a 30mm x 40mm  (all limbers have a 30mm frontage) for the pack horse and horseholder. Yes, I know: same base size - just one portrait, and one landscape.

Casualty marker figures are the dead Marty Pellow figure from the dead Scots pack, but with a headswap. 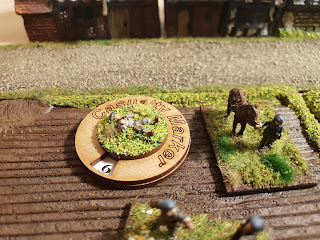