- 07 May
Lord Mauchline’s Regiment of Horse was raised in Lanarkshire in July 1650. Mauchline had been commissioned to raise a regiment of foot, but raised one of horse instead. 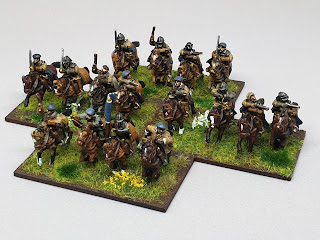 They saw action at Dunbar in September 1650, and later went south to England in 1651 fighting at Worcester. 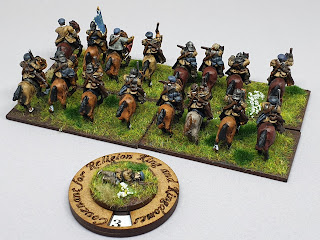 This is the first of three new Covenanter cavalry regiments to be raised. All of my existing Covenanter units fought for Parliament during the First Civil War: Mauchline's and the other cavalry units will be flying cornets from the Third Civil War (by which time the Covenanters had changed sides and had become Engagers). This is purely down to my desire to use known standards for units, when and wherever possible. They will of course fight for the King, and at other times they will fight for Parliament.

Plenty of headswaps here, I don't think there are two identical men in the whole unit. I normally mix my harquebusiers equally with swords and pistols, but seeing as the Scots loved their pistols so much the unit is pistol heavy.
If you enjoyed reading this, or any of the other posts, please consider supporting the blog.
Thanks.