- 14 December
I can put off painting tartan for only so long, so time to grasp the nettle and get down to it. So here are the next clan of marauding men from the Highlands.

Led by their Clan Chief, Sir Lachlan Maclean 1st Baron Morven, they fought at Inverlochy; Auldearn; and Kilsyth. They were present at the loss of Mull (Leslie came to the Island with a strong force of horse and foot in search of eight Irishmen, who were sheltering on Mull: seven were caught and executed, the eighth fleeing) and the defence of Duart Castle. 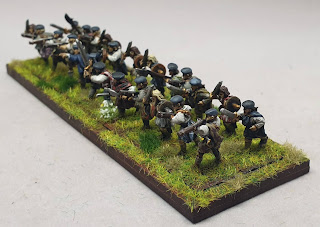 Sir Lachlan died in 1650 and the Chiefdom passed to his son Sir Hector Maclean. Hector was commissioned as colonel of foot of a Regiment to be raised from Argyll and Bute highlanders; they joined the army at Stirling in 1651 and fought at Inverkeithing. The Clan lost 500 men at Inverkeithing, as well as Sir Hector. It was during this battle that seven brothers died protecting their Clan Chief. Each brother crying "Another for Hector" as they stepped forward to protect him. 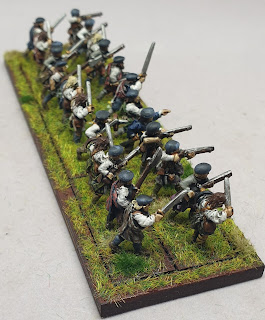 These are straight out of the bag, with no headswaps. A lowland officer has joined their ranks.

If you enjoyed reading this, or any of the other posts, please consider supporting the blog.
Thanks.
Army of Montrose figures Highlanders Peter Pig Regiment of Foot