Molyneux, sometimes Molineux, was Viscount Molyneux of Maryborough in the Irish peerage. Richard inherited his title aged 6, when his father died.

Molyneux attended the commission of array on Preston Moor, and assisted at the seizure of the magazine at Preston. On the outbreak of the war he raised two regiments, one of horse and one of foot, composed chiefly of Roman Catholics. They formed part of the Lancashire forces under the command of the Earl of Derby. 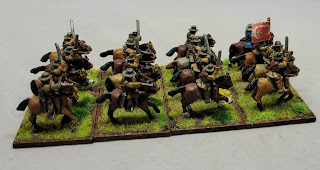 Present at the siege of Manchester; the siege of Brampton Bryan; Chipping Campden; stormed Crewe Hall; the siege and battle of Nantwich; they marched north with Rupert to relieve York fighting at Stockport, Bolton and Liverpool on route, before fighting at Marston Moor.

After Marston they would fight at Ormskirk and possibly Montgomery. Molyneux would finish the First Civil War in command of Prince Maurice's Lifeguard of Horse. 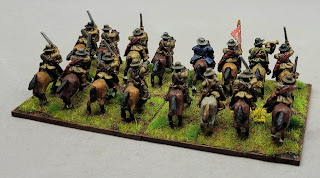 Molyneux continued to support the Royalist cause after the King's surrender, but was not involved in the military events of the Second Civil War. He was arrested in 1651, so had no involvement in the Third Civil War (don't believe Wikipedia!). He would die in 1654 after a long illness.

Yet again, straight from the bag PP figures, cornet from maverick Models, bases from Warbases.

If you enjoyed reading this, or any of the other posts, please consider supporting the blog.
Thanks.
figures Maverick Models Peter Pig Regiment of Horse Royalist Warbases