Not a 'new' Regiment, but another in the series of 'briefly mentioned, I'd better go into a bit more detail'. So here are fifteen minutes of fame for Colonel Sir Edward Widdrington's Regiment of Horse.

Sir Edward Widdrington was born in 1614, son of Roger Widdrington of  Cartington Castle in Northumbria. A Roman Catholic, he was created a baronet of Nova Scotia in 1635.

Sir Edward  raised 200 horse for service to the King, and Newcastle's Northern Army.

They were repulsed from Bradford; fought at Seacroft Moor; stormed Wakefield; were possibly besieged in Scarborough Castle; fought at Marston Moor (where Edward commanded a brigade of horse). What happened to the Regiment after Marston Moor is uncertain.

Not helped by some confusion between Sir Edward, and his cousin Lord, Sir William Widdrington. 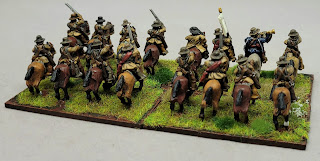 I was hoping that John Barratt's "A Rabble of Gentility, The Royalist Northern Horse 1644-45", and Reid's "Cavalier Army Lists" might help but they throw up yet more confusion. A little more digging appears to have resolved some of the issues.

Barratt describes Widdrington's Brigade at Marston as Lord Widdrington's (yet it was Sir Edward who commanded the Brigade, not Sir William).

Both cousins fought at Marston Moor, and both went into exile: Sir William, accompanied Newcastle to the Netherlands as part of his entourage immediately after the battle; whilst Sir Edward went into exile in 1648 (Newman, Royalist Officers pp 410-411, quoted in The Old Service: Royalist Regimental Colonels and the Civil War, 1642-46 by P R Newman).

Anyhoo, the Regiment would fight again, under their own name at Melton Mowbray; Pontefract; Leicester and Naseby.

Sir Edward would return to England at some point during the Interregnum, as he would be granted a pass to travel to Flanders in 1654, because of his health. He would be arrested in London in 1657 and released back to the continent. In October 1660 he petitioned Parliament for compensation for loss of his lands. He would die sometime later in Bruges.

Straight from the bag, these chaps; cornet as always from Maverick Models, bases from Warbases.