Regular readers (hello all seven of you), will hopefully have seen my previous post about siege engineers and will be familiar with the artefacts in museums across the country, and my attempt at creating some figures. 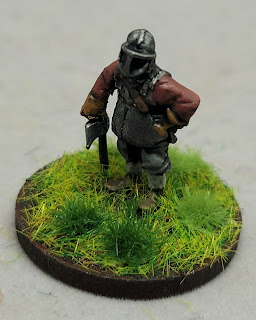 As PP still do not make a pack of siege engineers, and not being 100% happy with my previous attempts, I decided to have another go.

First off an easy conversion, to remind me how to use greenstuff.

If you have never used greenstuff before, there are some pretty useful online guides around written by people who, unlike myself, actually know how to use the stuff. Whilst Frothers UK has a 'bit of a reputation' for being quite a sweary and forthright place, there are some very good threads in the sculpting lounge forum. Don't expect responses as the whole forum is on its last legs, but there is some really good knowledge hidden amongst the expletives. 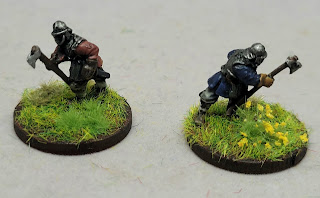 Couple of figures from the 45 pike open hand pack (pack 15) were the donor figures: a simple headswap to give them 'lobster pots', greenstuff siege tassets, and axes from Donnington Miniatures.

Next up a slightly more serious conversion. Pikes vertical, open hand (pack 11) contributed the figures. I've used this figure as a basis for my armoured engineers before, but this time I fancy something a little more adventurous.

As with previous engineers I started with a  headswap for a 'lobster pot', greenstuff siege tassets, and then his right arm was carefully amputated.

Cleaned up around the armpit then drilled into the body. I used a piece of 1.5mm rod to create an armature. I roughly measured my own arm - roughly 30cm for my upper arm, and 30cm for my lower arm. Which I reckoned translated to 3mm upper and 3mm lower for the figure.

I tried to give a slight bend in the elbow, then glued it in place. Fleshed the armature out with some greenstuff, then let it dry.

Once dry I used Milliput to create a hand, and tidied up the arm. Left this to dry, then fitted an axe (from Donnington Miniatures), and used some more putty to create fingers around the head of the axe. Quite pleased with the proportions, but I don't think the commercial figure sculptors have anything to worry about.

Splashed on some paint, and I think it hides my sculpting weaknesses quite well.

Obviously, two more siege engineers for each army, will require a rethink on basing - easily solved by going from a 4×2 movement tray to a 5×2.

Of course, anyone familiar with my army recruiting practices will be aware that what happens for one army, happens for the other. So here's the other set of engineers. 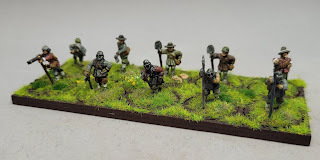 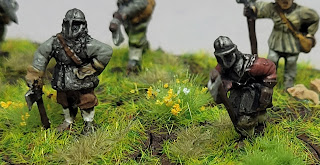 If you enjoyed reading this, or any of the other posts, please consider supporting the blog.
Thanks.
Assault Parties Donnington figures Parliamentarian Peter Pig Royalist Warbases