- 27 December
If you like your 'war' films full of bish-bash-bosh then this isn't a film for you.

This is a film by Ben Wheatley (who is perhaps slightly more famous for doing J.G. Ballard's "High Rise" starring Tom Hiddleston).

Shot in monochrome, the film follows a small, disparate group of individuals who have fallen off the edge of a battle. But not deserters! They are going for a pint. 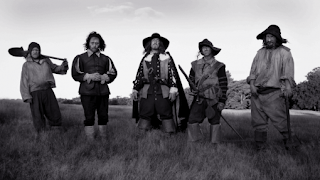 En route to the pub they stop and eat a mushroom stew, some of which have, shall we say magical properties.

They then set off to pull a rope, have a major group dynamic change, hunt for some treasure, and...

...but that would be telling.

An interesting film, I mean 'interesting' in a good way. So if you like your films more arthouse than Hollywood then you might enjoy this film.
If you enjoyed reading this, or any of the other posts, please consider supporting the blog.
Thanks.