All I will say is thank heavens for washes which help hide the really awkward bits to paint* at the front of the one piece figures.

Cornets, as always from Maverick Models. 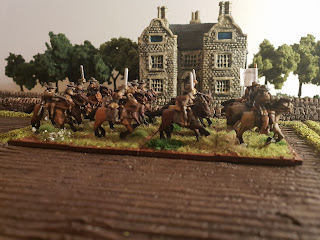 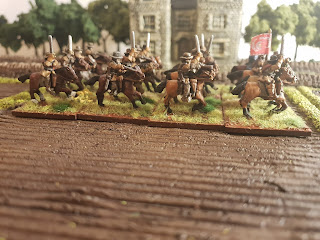 Derbyshire regiment of horse based at Chatsworth, took the field at Naseby, and besieged at Newark.

Part of the Marquis of Newcastle's Army, took the field at Marston Moor where Sir Charles was captured. He identified the eminent Royalist dead on the battlefield, and is said to have wept at their numbers. Sir Charles was later released in a prisoner exchange.
Colonel Thomas Leveson's Regiment of Horse 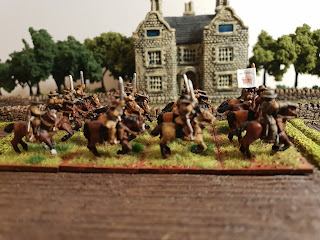 *They are if you are ham fisted like me, skilful painters won't have such issues

Now that 'death by brown paint' has been completed I can turn my attention to the star fort that I promised myself as a reward for finishing eight regiments of  horse (128 figures for anyone counting).
If you enjoyed reading this, or any of the other posts, please consider supporting the blog.
Thanks.
figures Maverick Models Peter Pig Regiment of Horse Royalist