- 03 December
I promised myself a sconce/star fort as a reward for completing eight regiments of horse. Only taken me seven months to finish them, as I keep getting sidetracked with engineers, generals, sedan chair things.

So here it finally is. My star fort. Or sconce if you prefer.

This is the resin model from Magister Militum (a Battleground model, by the late Ian Weekley). I believe that the only other production sconce in 15mm is a paper model. 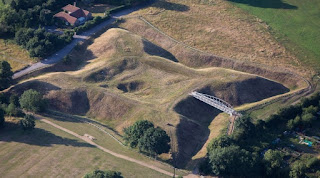 The model is more Vaubanesque as it is a stone built fort, and due to the way it is sold (you buy it as a half fort, and they only make one design of 'half') you end up with two entrances. 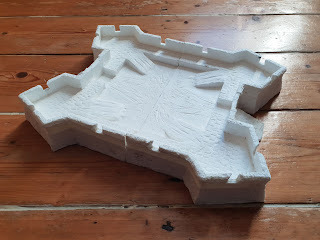 So I have two choices, modify it with Polyfilla and a Dremel, thereby making it into an earthwork with one entrance. Alternatively I use it as 'is'. I'm going for the latter so it can be used by Napoleonic forces too.

First impressions: this is heavy. Very heavy. The sort of heavy that you would not want landing on your foot. Pretty clean cast,  although it does need some cleaning up. My two halves don't quite marry up so a little sanding of the base will sort that out. Resin dust is grim stuff, so when cleaning up resin wear a face mask!

The only 'let down' with the model are the doors. They are pretty blank, devoid of any texture. Might have to cut them out and make some plank doors.

The two halves will require some filling to make them into a 'whole', so will need a suitable base. Some landscaping of the base will be able to represent the extensive ditch and banks that further protected sconces.

Panoramic shot of the Queen's Sconce, the car adds scale to how big the banks actually are. Tricky enough to try and walk up, and that's without someone shooting at you.

The Queen's Sconce had a series of pitfalls outside this ditch and bank system, but I am not representing these. Warbases were able to supply a suitably sized base in 3mm thickness. In larger sizes 2mm bases are more prone to warping, plus to avoid any warping issues I sealed both sides of the base.

Update 1: my sconce has been fixed to it's base, had the join disguised, had a bank and ditchdlandscaped outside, and has been undercoated black. Not content with that, I have applied my usual basing base (fine grit and mud brown paint). Stonework had an uneven coat of Railmatch weathered stone. Whenever I apply this I always think how awful it looks. A good coat of Citadel Agrax Earthshade tones everything down making it look a bit more, well stoney. 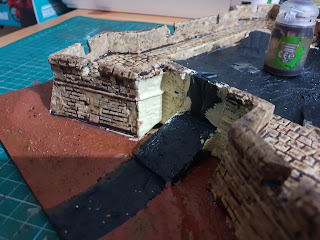 You can see why I always think I have messed up the stonework - small section of unwashed stone very clearly visible. Lots more weathering and washing to go. 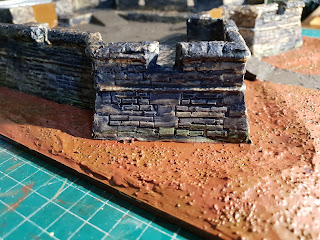 Update 3: the sconce has been drybrushed within an inch of it's life. A couple of coats of Army Painter anti-shine has taken the gloss finish of the washes away.

Then some landscaping. Tried out some Vallejo Still Water in the bottom of parts of the ditch. My usual flock and Tufts providing the vegetation. 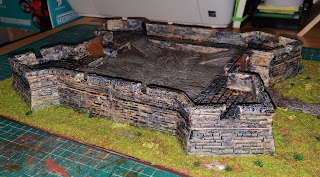 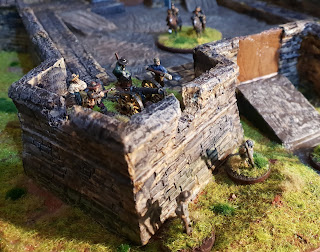 The white patches are the Still Water which hasn't dried yet. In daylight the stonework colours look more blended, the contrast is less noticeable. Better pictures tomorrow!