- 02 May
Sir Arthur Erskine of Scotscraig’s Regiment of Foot was raised in 1643. Raised by the clergy of Scotland to be "ane regiment for maintenance of religion"  they became known as The Ministers' Regiment. 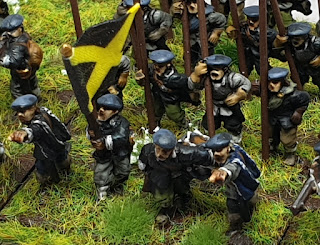 There are stories of them wearing black coats made from old clerical clothes donated by Ministers. Sadly there doesn't appear to be any contemporaneous evidence for this: we do know that a number of presbyteries were ordered to raise specific numbers of men for the regiment, and that the men were to be furnished with a "good piece" or £40 for their equipage. A similar story occurs in the American Revolutionary War, of black robed regiment raised by ministers. As with the Ministers' Regiment, there is no evidence for the American regiment wearing black. In both cases it could be a reference to the black coated ministers who raised the regiments.
Whether this is true or not, it gives me a blooming good excuse to paint some Covenanters in not-hodden grey. 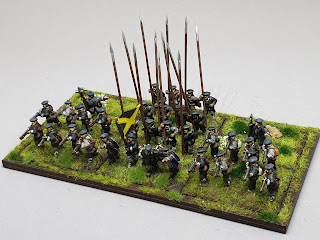 The regiment is re-enacted by Erskine's Regiment, pictures on their website have inspired me to paint the regiment in a mix of worn black and greys. Interestingly Erskine's regiment seem to exist outside of either the Sealed Knot or the ECWS. 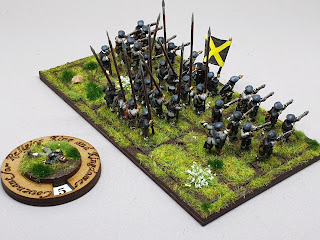 The regiment joined Leven's army in 1644 and marched south to York. Participating in the siege and also Marston Moor. later in the same year they besieged Newcastle. They marched further south in 1645 besieging Hereford and then Newark. After Newark they were quartered in northern England before marching back north and being disbanded early 1647.


The ensign they carry is purely conjectural, as they allegedly wore black I decided they should carry a black ensign. As another planned Covenanter regiment did have a black ensign (with white saltaire) I chose to give Erskine's a yellow saltaire.

The regiment also gave me the opportunity to break open one of my favourite pots of paint - RailMatch weathered black, which is suitably not-black enough to be able to take and show a Nuln Oil wash.
If you enjoyed reading this, or any of the other posts, please consider supporting the blog.
Thanks.
Covenanters figures Maverick Models Peter Pig Regiment of Foot Warbases