Duke of Hamilton's Regiment of Foot

- 19 June
The Duke of Hamilton's Regiment of Foot, unlike all of my other Covenanter Regiments of Foot, did not take part at Marston Moor.

Hamilton's were raised in Lanarkshire in1648 for the Second Civil War. A short lived regiment they fought in the Preston campaign, Penrith, Appleby, Stainmore, Winwick Pass, before surrendering to the New Model Army at Winwick and Warrington. 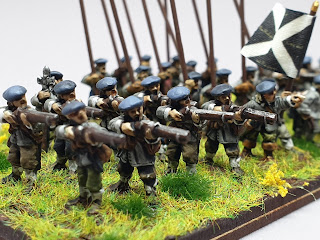 The regiment carried black flags with a white saltaire, apart from the Colonel's company who had a white flag with an ermine field. 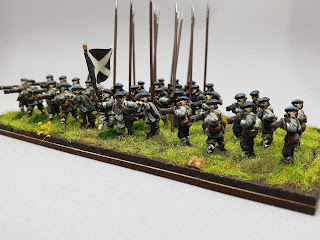 I must confess I struggled to get started painting these figures; I think my experiment in working out how long it took to paint a regiment hung heavy around my neck like the ancient mariner's albatross. Once I had got jackets, trousers, wood and flesh out of the way the process became less onerous. 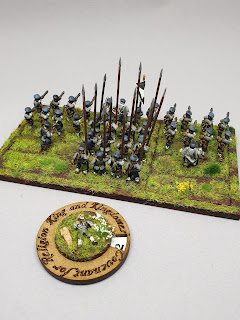