- 30 December
Sir John Meldrum's Regiment of Horse does not have spectacular or even notable battle honours, so why does it get it's own blog post? Regular readers will know that I have been having a bit of an existentialist crisis with the makeup of my two main armies. We know that generally armies had equal numbers of horse and foot, but rather than having 200 horse and 200 foot I prefer to field equal numbers of units. This karmic balance was shattered for a variety of reasons and my regiments of foot became rather top heavy.

So here are the first of twelve regiments of 'death by brown paint' horse - six each for Parliament and the King.

Pretty much straight out of the box Piggies, just a couple of headswaps. 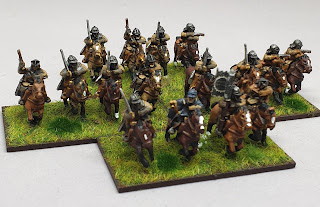 The cornet is interesting. There are two variations of Meldrum's cornet in circulation, and if you read a number of texts and look at commercially available flags they are presented as separate flags. However, if you read English Civil War Flags & Colours Volume 3 by Stuart Reid, rather than just look at the pictures you'll note that according to BL MS (Sloanee) 5247* then one side bears the motto DEUS PRO NOBIS  on the obverse, the same design but different motto on the reverse TANDEM BONA - CAUSA - TRIUMPHAT. **

The cornet carried by my unit is the correct form, and was made by Stuart at Maverick Models (Stuart is now quite chuffed at having  possibly the only commercially available correct form of Meldrum's cornet in his range).

* Now re-catalogued as "Sketches of regimental banners from the English Civil Wars" with shelfmark Add MS 5247
** if the flag flies to the right of the flag pole then that side of the flag is the obverse (flags are conventionally shown as their obverse side), if it flies to the left that is the reverse side.
.If you enjoyed reading this, or any of the other posts, please consider supporting the blog.
Thanks.
figures Maverick Models Parliamentarian Peter Pig Regiment of Horse Warbases